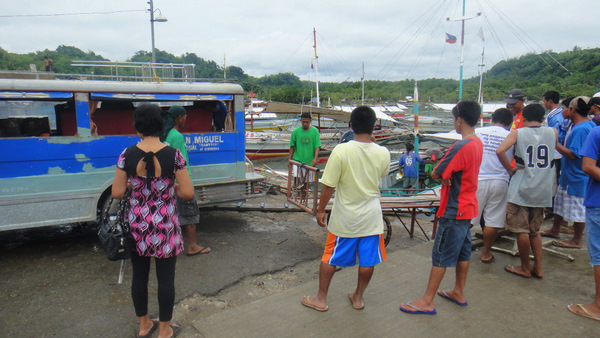 Had been raining all Tuesday morning last week as my asawa and I were furiously packing the rest of our boxes for our move that afternoon to Iloilo City. We had just received word the night before from our landlady that we could move into our new residence which is located about 30 minutes outside of town on Panay Island. It wasn’t a torrential downpour that I’ve witnessed countless times since moving to the Philippines over two years ago, but it was raining hard enough that our 30-plus boxes, sofa bed, and three pieces of luggage would be thoroughly soaked by the time we reached our destination. Step One of our journey involved hiring a jeepney from our home in Guimaras (we felt a smaller multicab would be too small) that would take us to the Jordan Wharf. Once at the dock we would have to hire a pump boat to take us to Iloilo. At the Ortiz Dock in Iloilo City, we would have to employ another jeepney driver to take us on the approximately 45-minute journey to our new home. Any kind of rain could further hamper this potentially logistical nightmare. 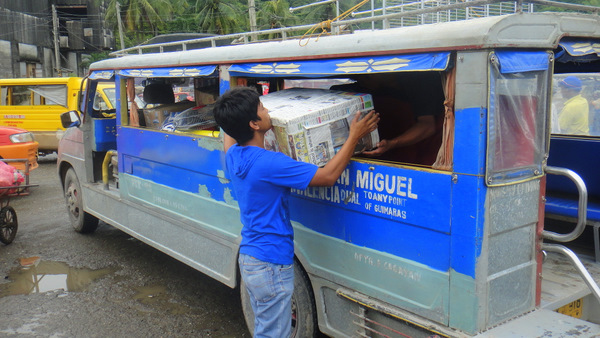 Noontime approached. It was my plan to have my asawa go over to “The Crossing” jeepney station in Guimaras to procure a vehicle to haul our stuff to the aforementioned Jordan Wharf. Had no idea what that would cost. A charge for a multicab, a smaller vehicle than a jeepney, costs 150 pesos. However, a fully-loaded large jeepney would probably cost considerably more. I knew that The Sainted Patient’s Wife would likely have a chance of negotiating a better rate than I could. Although I have only had one bad experience with the “foreigner tax” in our local province of Guimaras, I felt it could save us some money if she would check on the fee for our 25-minute journey and not me. Most of the locals realize I’m not a Filipino.

Around 12:15 the rain had stopped but the threat of more bad weather still loomed. I asked my wife to please go and hire a jeepney before the rain started again. My fatigued asawa grumbled and complained but started putting on some makeup. I knew this would be at least an hour-long process. I personally did not comprehend why it was necessary to apply layers of powder and lipstick and pencil on fake eyebrows to just hire a jeepney. All I have to do is a slap on my sandals, put on a clean shirt, and I’m ready to go. After 15 minutes my spouse was still applying makeup, so I advised her I would go. She mumbled something in her native Ilonggo. I maturely mumbled back in English, something about “being charged double” and took off walking as a light sprinkling of rain began again.

After just turning the corner to the main road, a colossal white, open bed truck came to a halt as it’s driver shouted out to me. I couldn’t recall if I had ever seen the driver before, but he immediately announced to me that he was Dennis’ brother Joel. Dennis, a relative that is the local policeman, hollow block factory owner (we ordered our blocks from him for the construction of our new CR (Comfort Room/Restroom over two years ago), and furniture maker (also bought some gorgeous solid mahogany wooden door from Dennis.) He asked where I was going, and I told him I was on my way to rent a jeepney to the Jordan Wharf. Told him we were moving to Iloilo. I asked him how much he would charge to do it, but he replied that it probably would cost a lot for the gasoline, plus it was raining anyway, and his truck was not enclosed. He did advise me that hiring a jeepney would cost cost 500-700 pesos or even more. Joel gave me a ride to the jeepney station and called over to the dispatcher in the local language to explain to the man what I wanted.

Since it was lunchtime, the regular jeepney dispatcher who always called me “brother” was gone. So was his back-up guy, Nelson. Instead, a Filipino gentlemen that always looked like he had a big chew of tobacco in his cheek was on duty. I told him what I needed (however, Joel had already done that for me), and led over to a large rig that would be big enough to handle our moving job. The driver was a young pinoy, one of the youngest wagoners I had ever seen on our island province of Guimaras. I asked him the price, fearing the worst. He asked how many boxes we had. Told him around 30, and that a sofa bed was our only furniture. (We also had an aging 20-inch Panasonic television my asawa had shipped over in a balikbayan years ago plus our air conditioning unit. My wife had made the executive decision to leave our refrigerator behind since she believed our brother-in-law Joery was thinking of opening a sari sari store and would need it. We certainly had no disagreement with him and bother of us were willing to help him out by donating the fridge.) “Four hundred pesos, sir” was his reply. “That’s fair, ” I said, pleased to get such a good rate. “I’ll be sure to give you a good tip,” I advised him. He smiled.

The young Filipino, along with his equally youthful helper, drove over to our house. I warned them that my asawa could be in a bad mood. They smiled warily. I began moving boxes to our covered front porch, and we now had fortunately received a break in the weather though more rain threatened. I was anxious to get moving. The jeepney driver and his amigo started picking up the packed boxes directly from our room so I stopped and let the far younger guys take over. My asawa attempted to help, but I suggested that she just rest and let the guys do it. Things were going well, lots of boxes were being loaded until the sofa bed was placed inside the jeepney. It seemed it was taking forever for our crew to get that piece of furniture in the vehicle. It wasn’t a particularly large piece, and I wondered if our crew should have loaded it first before bringing the boxes in. Finally, after about 20 minutes, with the skies beginning to darken again, the two workers came back to the house for more boxes.

Seems the delay was caused by one of the metal legs of the sofa bed breaking off when the guys were trying to load it. They told my asawa that they could get the piece welded after the jeepney was packed and we headed out of town. I didn’t want to be delayed any further because bad weather seemed imminent, but the movers said they could just get a spot weld done at the metal works shop.

The two-man crew finished packing the jeepney with the rest of our boxes, luggage, fan, microwave, and other assorted items. By the time the vehicle was loaded it was packed full. We headed out to the Jordan Wharf in Guimaras but not before stopping at the local metal works shop to see if the broken sofa leg could be welded. The driver’s assistant spoke to one of the workers who immediately did a spot weld. Only took a few minutes. The crew member ran back to the driver to ask for the 20 pesos to pay for the weld. He dug around in his pocket and found some change. I took my wallet out to reimburse him, but he did not want to take my money. I insisted. It was only 20 pesos, plus the guy had charged me a very reasonable rate. We were on our way to the wharf, and I said to my wife that I hoped the Tawash would be available. I had met Larry, the captain and owner of this particular pump boat, many months ago and felt he would give us a reasonable rate.

The skies were darkening as we pulled up to the dock. One of our regular porters, Joseph, came over to greet us, and I asked him if the Tawash was at the wharf. It was and the skipper Larry was on board. We had caught a break. The rain was momentarily holding off, and the pump boat I wanted to hire was available. I walked over to the boat and greeted my amigo. “How much to carry all of this to Ortiz Dock in Iloilo City?” I asked. “Oh, we will see.” was his reply. With rain threatening to pour again I had no option but to trust him. This was no time to negotiate.

Part Two of our move to Iloilo City coming up. Sorry for the long delay in posting new material. Smart Bro was to have my Internet service transferred over this past Thursday, but due to a “processing error” the installation date was pushed back. More on that nightmarish story later. A BIG THANKS TO TOM RAMBERG who recently donated 5,000 pesos to help us with our move. Also, a big thanks to “IT”S YOUR THING” for their recent generous donation.

4 thoughts on “The Iloilo City Move! Part One.”