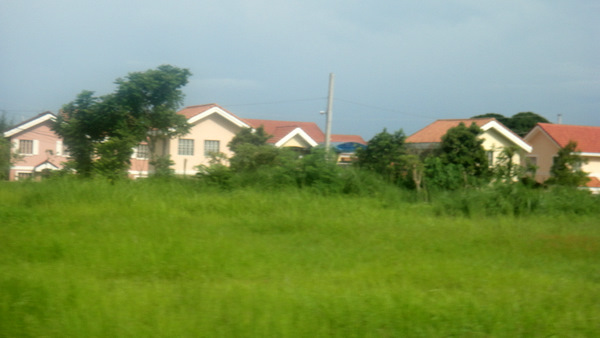 With our sofa bed on the top of our rented multicab and Guimaras porters, young Joseph and the mullet-wearing Neil, hanging on in the back, my asawa and I were perched shotgun next to our driver who was navigating the Iloilo City traffic.  We must have looked like a Filipino version of Beverly Hillbillies as we drew some stares and startled looks from pedestrians. Light rain now danced across the windshield of our vehicle as we approached the outer limits of the city on the final segment of our journey to our new home. Guimaras was already becoming a faded memory as I was excited to start fresh in a new location in a subdivision in the Philippines that had actual paved roads and sidewalks.

No more walking the muddy, cow poop-laden path which passed for a street at our old residence. No longer would I have to endure the stares of my mother-in-law, The Feared Giant Lizard Killer, as she would silently stand for minutes in her doorway or in the entrance to our room just gazing at me. Was it my rugged good looks she was admiring? I was clueless (a condition which I admit is my normal state.) No longer would I have to hear the loud “plop” of my almost deaf mother-in-law’s slippers as she walked across our bare concrete floors. No longer would Lola {grandma) be able to snuff out the flame of our LP gas burner stove top I would be cooking on in our narrow back kitchen. She would invariably open the rear door, just two feet from the stove, to get back into the house at the precise instant I had fired up the burner. The resulting draft would always extinguish the flame! Minor irritations? Perhaps, but they build up over time.

But now we were moving to paradise! Tiled floors. Four rooms plus a CR (Comfort Room/Restroom.) I would have my own room for my computer. The Sainted Patient Wife would have her own room! Privacy again! I was ecstatic! My wife and I would dearly miss our nieces and nephews we had left behind, especially our beloved JalAmiel who is turning four at the end of this month, but our decision to move, prompted by the ungratefulness of my wife’s mother and youngest sister, had given rise to our move to  Iloilo City. Finally after over two years of living in the Philippines we would be enjoying our retirement years together without any interference from meddling relatives and visitors.

Our driver was now well outside Iloilo City. The rain was still a light drizzle as our driver stopped to ask directions to our subdivision. We were not familiar enough with the area to be able to offer him any assistance. I can’t even find my way home from the front entrance to our residence yet. It’s a 30-minute walk to our main gate and a two-jeepney ride to do some shopping at SM City, the mall nearest to us, or we can plunk down 7 pesos (16 cents) each for one of the many shuttles that operate in our guarded subdivision to reach the entrance or catch a ride to our home. Good thing my asawa has a much better sense of direction than I do, otherwise I would probably still be wandering aimlessly down our paved sidewalks like a man that has consumed too many bottles of Red Horse.

But after making another stop for directions, our driver was able to find our new home. All we had to do was wait for our real estate agent’s son to process the permit which was needed for any new residents before they move into their home. With four security guards armed with pistols, we weren’t going anywhere. The minutes passed as the rain started to come down a bit harder. I was concerned that our sofa bed perched on the roof of the multicab would get wet.

It had been a long day for my asawa and I, and we were almost at the finish line. Finally, the necessary paperwork was done, and our realtor’s son guided our vehicle to our new home. Our porters from Guimaras, Joseph and Neil, quickly unloaded the multicab as I paid the driver. It had taken quite a while to reach our destination, and I was grateful that we had arrived without any major difficulties so I paid him P1,000 (23 US Dollars) as I also wanted him to give our porters a ride back to Ortiz Dock so they could return to the Jordan Wharf in Guimaras. He was quite pleased with his 400 peso tip and started to help unload his multicab.

The Sainted Patient Wife directed our crew to move everything into one room where we would unpack and sort everything out later. I give our porters a generous 600 pesos (13.85 USD) each as we shook hands, and I thanked them for all the work they have done for us in the past. They took off in the multicab waving as the driver honked his horn. We both were fatigued but were happy to be in our new home. Clusters of curious neighbors had gathered to see who the new residents would be. I was too tired and hungry to greet anyone at the time, but future posts will deal with our new adventures in Iloilo. Hope you stick around to read about the destruction of our television, our lack of running water,  and the frustrating situation we had with Smart Bro to get our broad ban service transferred. Even in paradise you have to expect a few glitches.


4 thoughts on “The Iloilo City Move. Part Three. The Conclusion.”