An American ex-pat, Brother Tom, pictured on the far left, is back (Return of a Legend). My favorite oblate from the Trappist Monastery in Guimaras has returned after an eight-month absence from the Philippines. His personal business in the States is now cared for, he arrived a week ago this Friday after a long 15-hour United Airlines flight. 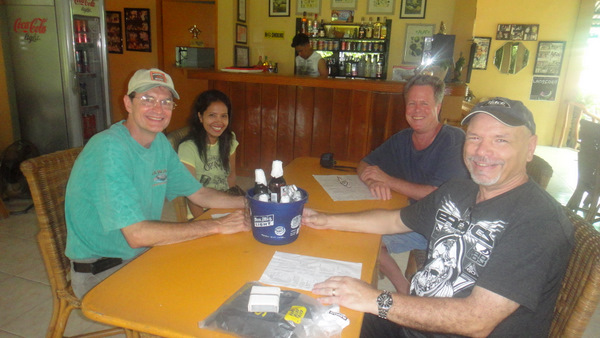 I don’t know if he kissed the ground upon his arrival at the NAIA in Manila, but I can assure you that he is happy to be back. And we’re glad he’s returned.  I can honestly tell you that I’ve never met such a unique character as my expat friend. He’s truly an original.


Accompanying my favorite oblate was Frank, an old buddy from Florida. They’ve been friends since the ’70s. Frank is an avid animal lover, and is especially fond of a baby goat that lives near Tom’s farm. However, as you can see by the following photo, Frank, second from the right, does not mind the company of a cute Filipina, either. 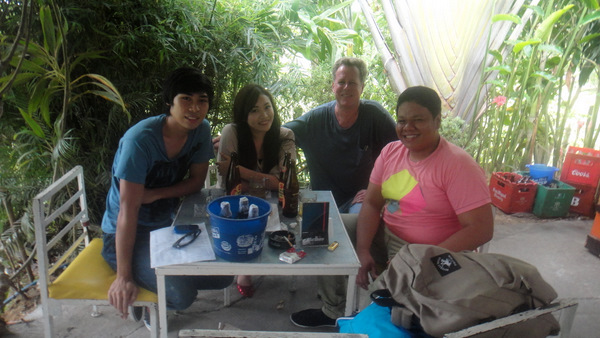 Of course, I would be remiss if I did not mention Brother Tom’s  beautiful girlfriend, LenLen (seen sitting next to Tom in the first picture), one of my asawa’s many relatives living on the mango paradise of Guimaras.

Tom, LenLen and Frank visited SM City in Iloilo this past Monday, just two jeepney rides from our home. We went to Langfords, located behind the Western Union office next to the mall, to have some lunch and a “few” bottles of San Miguel Pale Pilsen. I thought it would be good to have some bonding time with The Brother and his visitor from America who would be staying with his amigo at “The Farm” in Guimaras for six weeks.

I ordered a plate of chips and was impressed by the generous serving. Tom, whose only fault I can see is that he is a vegetarian, wanted to order a dish of vegetables and rice. After being first advised by our waiter that this dish is not available, he later returned to tell Tom that the cook would be able to prepare his order. Considering that the establishment was not packed with customers and that they did serve separate side orders of rice and veggies, Tom’s request, albeit a strange one to me, would be honored. 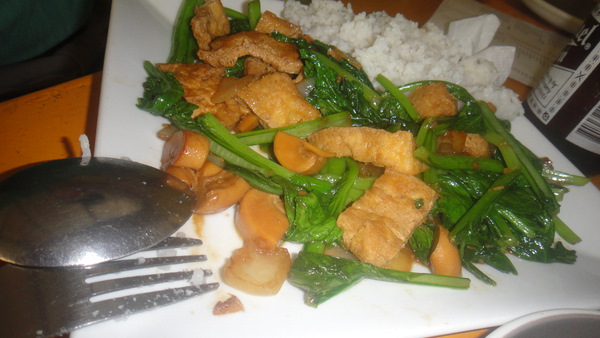 My asawa, the official staff photographer for “PhilippinesPlus,” took the photos you see on this post before LenLen decided to go with my spouse to the Ricky Reyes’ Salon in SM City to have her locks trimmed by Bambi, my wife’s favorite stylist there. That afforded the guys some additional “bonding time” with even more chilled buckets of Pilsen.

After a couple of buckets, we decided to move to the smoking area since Frank wanted to buy a cigarette and have a smoke. He only was able to purchase a ten pack for 30 pesos (70¢), and we managed to get a table located next to the trio seen in the second photo.

My asawa and LenLen came back from Ricky’s, and we decided to go back to SM City since I needed to pick up a few groceries. Still had three bottles of San Miguel in our last bucket, but I suggested to Frank that he pass the remainders to the aforementioned trio who were drinking Red Horse.

After some persuasion, we managed to get the group to finish off the brewskies for us, and we headed back to the mall after I paid the tab for everyone. I was in one of my rare generous moods. Only 1300 pesos (30 US Dollars) for three buckets of San Miguel Pale Pilsen and lunch for our five-person crew. 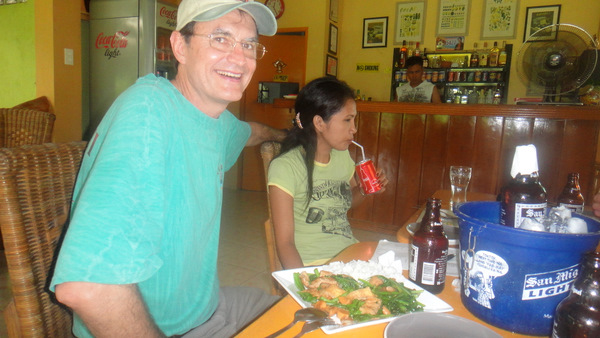 We said our goodbyes to Tom, LenLen, and Frank. But it wouldn’t be long until we would see them again. In an inconceivable moment of spontaneity, the next day I suggested to my asawa that we take the pump boat to Guimaras to visit Tom and company. More on that adventure coming up along with photos of my first taste of balut. Now that was a culinary experience I will never forget!

3 thoughts on “Return of a Legend! American Expat Brother Tom is Back in the Philippines!”