My asawa woke up with the fishbone still stuck in her throat. The last post told the story of how my spouse, after 47 years of eating fish, had managed to swallow a bone the day before that refused to be dislodged. I advised her that we were going to the doctor this morning, and refusing to go was NOT an option. At times I have to  put on my macho facade and insist on my instructions being followed. This was one of those instances. 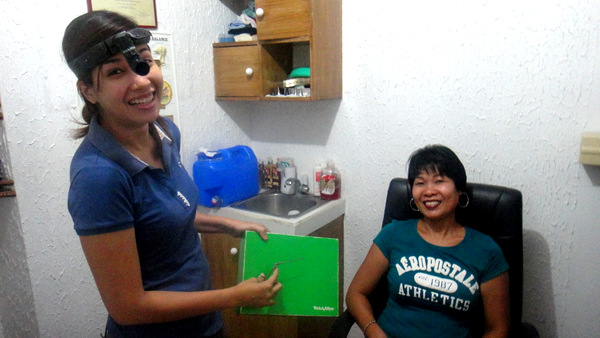 I had hopes of getting to the doctor’s office fairly early in the morning. The plan was to visit an EENT at Doctor’s Hospital in Iloilo City, Robert Martin B. Barredo. I had visited the medical specialist back in late 2010 for a sinus condition that was causing a toothache.

So when one hour had already passed as my wife prepared for our trek to the doctor, I stepped outside, expecting her to be finished shortly with her multiple applications of make-up and the choosing of the outfit of the day.

So as I stewed underneath our tarp which protects our hot laundry lady, I finally let out a huge sigh, hoping it would be heard in our back bedroom. No response. I let out another, sigh that is. Still no reaction from my asawa. Finally, in desperation and frustration only known to men that have “significant others,” I sarcastically said: “I hope we get there this morning!”

Finally, a response! “Go ahead by yourself then!” “But I am NOT the one with a fish bone stuck in my throat!” I replied to my asawa, very pleased with my clever retort.

Amazingly, she did not fly out of the house with a bolo in her hand. She said nothing. A few minutes later we were on our way. Made it to Doctor’s Hospital in Iloilo City around 9:30, that’s being.

Went up to Dr. Barredo’s office and it was closed. Closed for the week.  I remarked to my wife that if we had gone yesterday as I had wanted, we would have been able to see the doctor. She again said nothing. Evidently, that stuck fishbone was affecting her vocal cords.

Decided to check the directory of the healthcare clinic to see if any other EENT’s were listed. There were two on the second floor. The first doctor only had clinic hours on Saturday from 1-3 pm. Since today was a Friday, we went to our next choice.

Melita Jesusa Suga T.  Uy,  M.D. was listed on the office door along with the names of a few other eye doctors, not EENTs. We went inside and asked the receptionist, Hershey (in the center on the next photo with Lenny,  also on staff; that’s my asawa on the right), if the doctor was in. 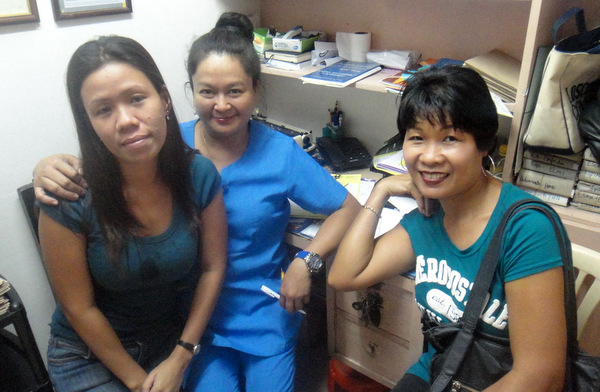 The doctor would be in at 10:30. Only an hour wait. In the Philippines, many healthcare clinics and doctor’s offices do not take appointments. It is not uncommon to wait all day for a physician to examine you.

But when Hershey came out to advise us the doctor was performing a surgery and wouldn’t be in until noon, I knew we were in for a long wait.

“What did I want to do?” my asawa asked, knowing her impatient American expat husband was already tired of waiting. “What can I do?” I replied. “We’ll wait.”  So I sat and fumed.

Noon passed with no sign of the doctor. My asawa went into the office to find out the latest status. Now,  “the doctor was on her way.” I’ve heard that one before.  That’s right up there with “the check’s in the mail,” and “I’ll respect you in the morning.”

When Hershey came out 30 minutes later and told everyone waiting  to go to the canteen and have lunch, my mood darkened even more. As my asawa knows, my patience is by no means unlimited. But the fish bone remained stuck in her throat so we continued to wait. 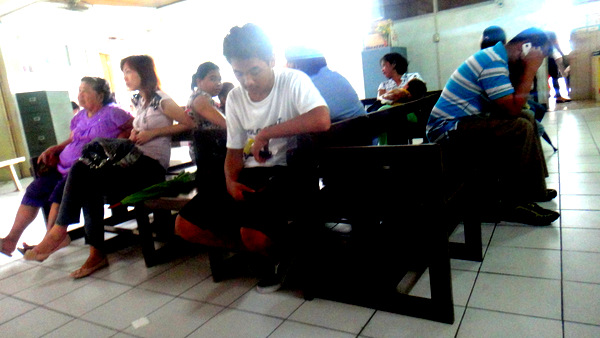 I passed the time watching some of the most attractive women in Iloilo City pass through the corridors of the health care clinic. I’m talking about the pretty pinay pharmaceutical reps. Around 1:35 I saw one enter the doctor’s office. A minute later my asawa was called in. Turns out the Filipina I had mistaken for a sales rep was actually the doctor!

Five seconds later she, well, fished out the fish bone as seen in the lead photo for this story. My wife remarked how young the doctor is and later told me she is quite pretty. She is both. The doctor graciously posed with my own beautiful asawa in the next photo.  Guys, she’s married. And her age? I asked. She’s 36. Looks in her early twenties to me. 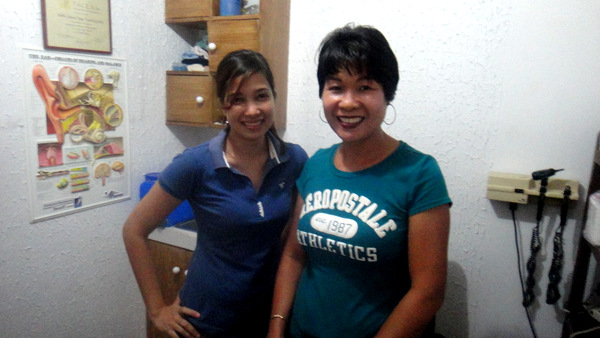 She apologized for the delay. Turns out she had three surgeries in a row to perform. I was so grateful that she took care of the fish bone problem, and that my wife was fine now. If you’re ever in Iloilo City and need the services of a very competent EENT and don’t mind looking at a very pretty pinay such as the doctor, I highly recommend her. The wait? You get used to it. Even if you’re an old geezer like me.

(Hershey and Lenny have advised me that they are single and would like to meet some single guys out there.  Very nice ladies.)