Saturday morning. 10:30 am. I’m on a jeepney to SM City to pay my Smart Bro bill and pick up some ice cream. Our nieces and nephew from Guimaras will be visiting us this upcoming week at our home in Iloilo and the kids love ice cream. My asawa is in the mango province now to deliver groceries and to pick the kids up. My phone rings. I have my cell on the “Outdoor” profile so I can hear it. I’m a 61-year-old geezer. Plus, the jeepney makes more noise than pre-tweeners at a Justin Bieber concert. I squint at the name on the incoming call. It’s blurry (don’t put my reading glasses on.)  Has to be my spouse. 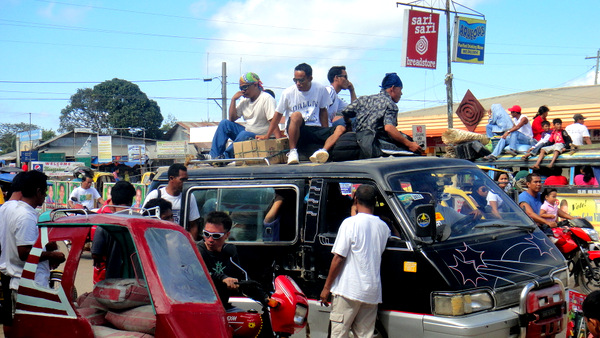 “The Crossing” near “The C0mpound” in Guimaras

“They can’t find Dad!” Someone saw him in Ravina last night (Friday) but no one can find him now!” my asawa excitedly informs me. “We have relatives that spotted him this morning (Saturday) but I can’t reach them. They don’t have a (cell phone) signal there!”

Lolo had wandered quite far from home. Here’s a Google Map. In his present condition, an imaginary girlfriend and chasing duwendes, it was quite dangerous for him to be roaming the forests and jungles of his home province alone. 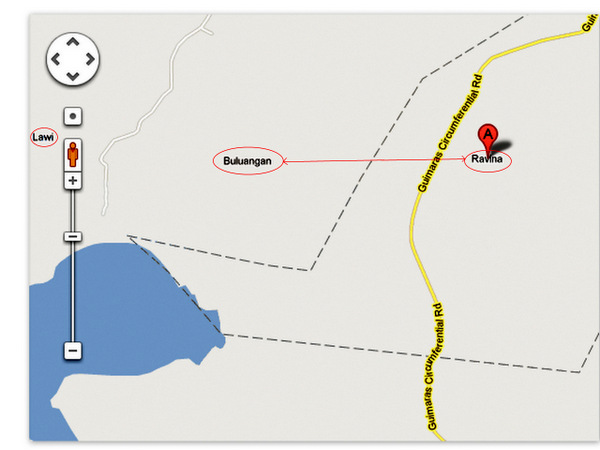 14 kilometers from Buluangan, my father-in-law’s home, to Ravina,  if you took the Guimaras Circumferential Rd. He didn’t. This seasoned resident of the mango province probably took a path directly through the jungle to Ravina where my wife also has relatives.  She has relation scattered throughout the province. I’ve circled Lawi, seen on the far left, since that’s the original birthplace of my asawa. Could lolo be planning to journey back to Lawi? Hard to say in his present state of mind.

Hours pass without any word from my anxious spouse. I grab a Big Mac Combo at McDonald’s and pay my Smart Bro bill. It’s Saturday. SM City is overflowing with shoppers and kids walking around sending text messages and bumping into things (including people.)  Quickly go downstairs to the SM Supermarket to pick up my ice cream, Rocky Road, and a few other items. The bagger wraps my ice cream in newspaper to help keep it from melting on the journey home.

Head out the front entrance to catch a different jeepney than I usually do. I’ll take a ride to the Jaro Big Market and then hop on a jeepney to San Miguel. The San Miguel jeepney passes by the Savannah Subdivision where we live in Ilolo and is a shorter route than we usually take. This is my first solo trip via this new way home but I manage to arrive to our main gate without any problems.

While waiting for the Savannah shuttle to load up with passengers and take me to to our house (it was 2:00 pm and I didn’t feel like battling the hot summer sun for the 20+ minute walk to our place)  I tried calling my wife again. Still no response.

The shuttle fills up and I arrive home. Call my asawa again. This time I reach her. Her father has been found! A relative spied him wandering around in Ravina and took him to Cousin Alex’s home where he was fed. Cousin Alex is out on bail and still awaiting trial for murder charges.  Been ten years now and still no court date. Alex, was the head foreman of the construction crew of “The Compound” in San Miguel, my wife’s home she had built for her parents while she worked as an Overseas Filipino Worker, OFW, in Taiwan.

My father-in-law, who was now at home sleeping in the nipa hut back at “The Compound,” was covered in mud and scratches according to my wife. He had been roaming around all night. Hadn’t slept at all.  Had lost the new slippers my spouse had just bought him. And was talking about where Flores, one of his three sons, was buried. He had seen Flores lying on the ground. 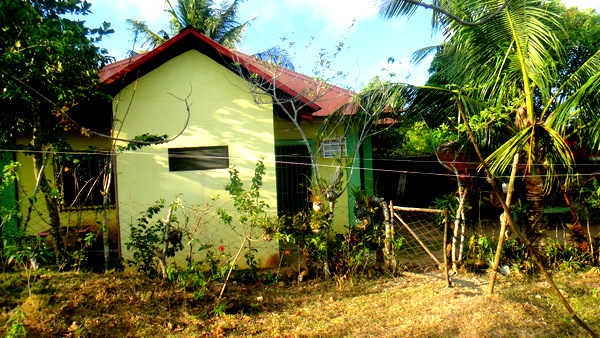 “The Compound” in Guimaras

My wife took her father to a trusted physician in Guimaras that Saturday afternoon. She came back to Iloilo in the early evening with our two nieces, JalAmiel and Den Den and nephew Jorreal. Lab tests and x-ray were run on Lolo and hopefully some kind of medications will be prescribed to help him sleep.

My father-in-law  cannot presently walk as he somehow damaged his legs during his midnight walks. Brother-in-law Joery and nephew Sherwen had to carry him into the tricycle to visit the doctor’s office in Iloilo.

We would like to hire someone to take care of my father-in-law once he’s able to walk again. Could cost around P1,500 to P2,000 a month for him to have a live-in companion in addition to meals for Lolo and his caregiver. There’s no room at our present rental home in Iloilo and we do not plan to move to a new and bigger home until late 2014. Best alternative is for the caregiver. He’s not going to stay at “The Compound” in Guimaras once he’s able to get around again. Not without my asawa keeping an eye on him.

Update: Lolo is able to get around now and wants to return to his home in Buluangan. Hopefully, my relatives in Guimaras will be able to keep him at our home there until we can find someone to take care of him.  We will be returning to the mango province this coming Sunday and staying for about six days for the 20th Annual Manggahan Fesitival. We plan to find a caregiver that can watch over lolo on a full-time basis at that time.