It was chaos central! After taking a pleasant excursion on the SuperCat Fast Ferry from Iloilo City to Bacolod, “The City of Smiles,” this American expat in the Philippines, wasn’t smiling as we took our P150 taxi drive to the Ceres Bus terminal. 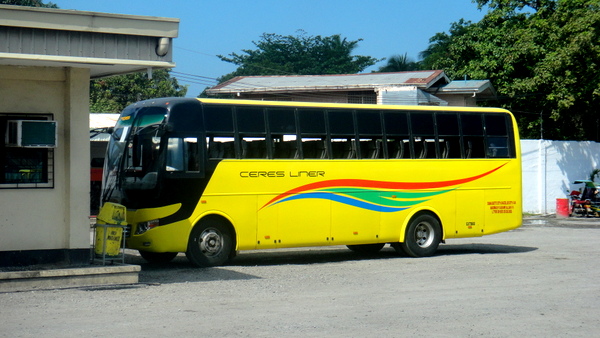 It was around 9:00 am on a Friday morning when my asawa and I arrived on our journey to Cebu. I had never taken a bus trip in my almost five years of living in the Philippines and knew the trip would take much longer than a Cebu Pacific flight, but we were in no hurry. We needed a break and this mini-vacation for my wife and I was something she was long overdue for. 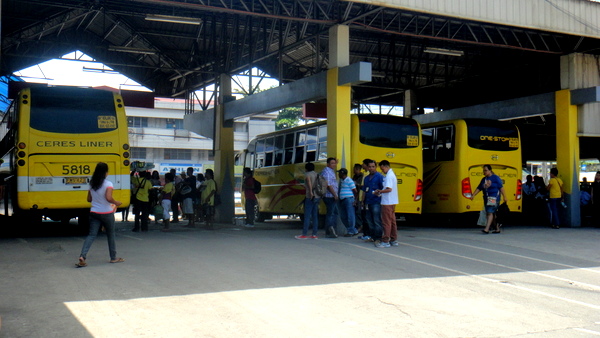 Buses were pulling in and out of the terminal on a regular basis. Upon our arrival, I checked with a security guard who informed me the next bus to Cebu would be leaving at noon. We had a three hour wait in the heat. This wasn’t going to be much fun.

I checked with the nearest dispatch employee who informed me that tickets wouldn’t go on sale for the trip to Cebu until 11:00 am. We decided to head out to the nearby snack shop to grab a couple of soft drinks. Don’t call them “soda’s” here. No one will have any idea what you are talking about. 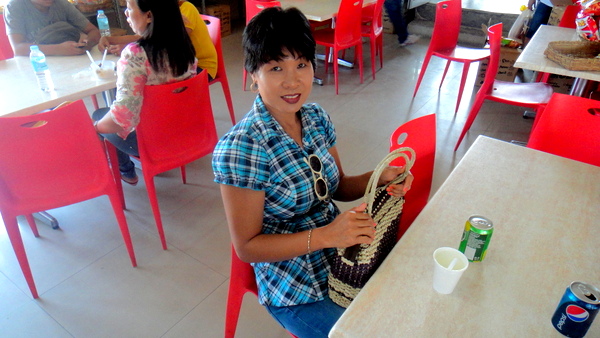 The place didn’t have air con but did have a few fans scattered about. That’s my lovely asawa posing for this photo. She had her usual lemon-lime drink, a Seven-Up or Sprite, while I always opt for a Pepsi or Coke. Regular. Don’t give me any of that diet crap. 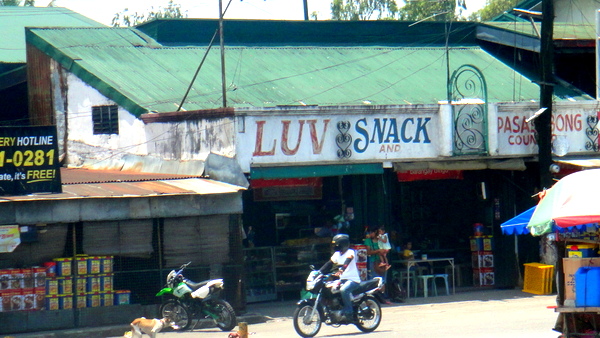 If the Ceres snack center didn’t satisfy you then a trip across the street the “Luv Snack” shack might do the trick.

We headed back outside. My spouse then looked at her purse and saw that someone had tried to tamper with the zipper.

While leaving the snack shop, unbeknownst to me, someone had bumped into my wife with a back pack. No doubt an accomplice was standing nearby to try and get the contents of the purse.

After all, being a “rich” foreigner, we were conspicuous targets. There was only one other foreigner in the whole terminal. Fortunately the would-be thieves failed in their attempt to rob us but if you ever visit this Ceres bus terminal in Bacolod pay extremely close attention to your surroundings. 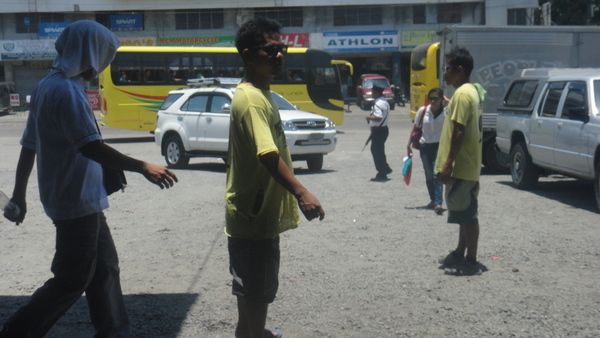 The guy on the left is trying to beat the heat. The sun was brutal. Sweat was pouring out of me faster than the growing list of legislators implicated in the Philippine pork barrel scam. 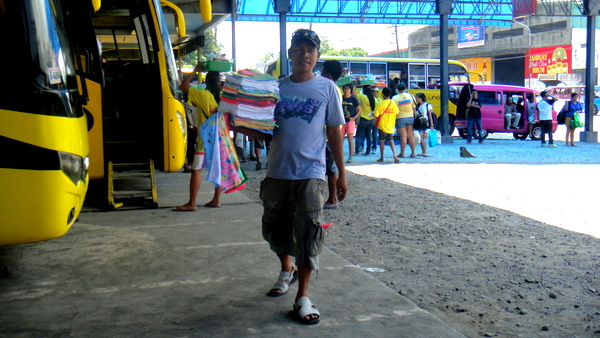 Vendors from Ceres, along with some independents, hawked their merchandise beside a steady stream of beggars that roamed the terminal. It was our visit to Bacolod City, but the bus terminal doesn’t make a great impression for first time visitors by any means

We both strained to hear the announcements being blasted from the loudspeakers.  It was like trying to understand the girl at the drive-up window at Mickey D’s back in the States.

Finally, a little after 11 am, we both heard the word “Cebu.” We had managed to located ourselves next to the ticket salesman and I made sure no one tried to work their way around us as we managed to be second in line.

We were able to board the bus bound for Cebu about 30 minutes later. The bus was huge! One of the biggest I had ever seen. Our tickets said we had seats “202” and “203” but as we entered the vehicle we immediately noted that the seat numbers didn’t go that high. 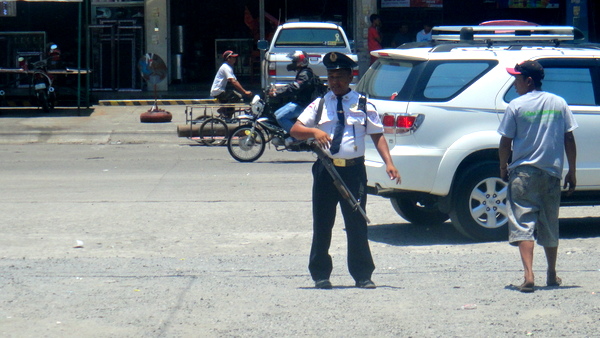 Security Guard stationed at the Ceres Bus Terminal in Bacolod

I went up front to check with the security guard who was standing next to the driver checking tickets. The guard asked for my ticket stub, I handed him my ticket.

No, he was looking for a stub that had numbers punched out it. I remember taking that and putting it in my “man purse, “which I use to carry my Samsung Galaxy Tablet, but couldn’t immediately find it. I thought it was our receipt.

My wife was becoming increasing irate and frustrated with me. It wasn’t the first time.  Passengers were trying to get into the seats we were occupying. “I’m old!” I told my angry asawa. That’s the best line I could come up with at the time.

Finally, I found the stub with the seat numbers and handed it to the guard. We had front row seats with no one in front of us! I was quite pleased. But it took my wife a few more minutes for her dark mood to pass, however.

We left at 12:15 pm, only 15 minutes past our scheduled departure time. While our tickets were only P550 each, a little over 12 US Dollars, which included the ferry fee from San Carlos City to Cebu, I knew we were in for a long haul.

I had asked the ticket vendor how long the trip to Cebu would take. “Seven hours,” was the reply. But like I’ve said before, I’m a retired American expat living in the Philippines with all the time in the world. What’s seven hours?

Next up: The ride through Bacolod and some amazing mountain views.