Riding the 14 peso pump boat to Iloilo City gets dicey. The 15-minute trip from Jordan Wharf to Ortiz Dock in “The City of Love,” is usually uneventful. I can’t swim but have never had any worries about our vessel capsizing. I don’t even wear the life jackets on board, though when my asawa and I first retired to the Philippines five years ago, it was mandatory to don them. 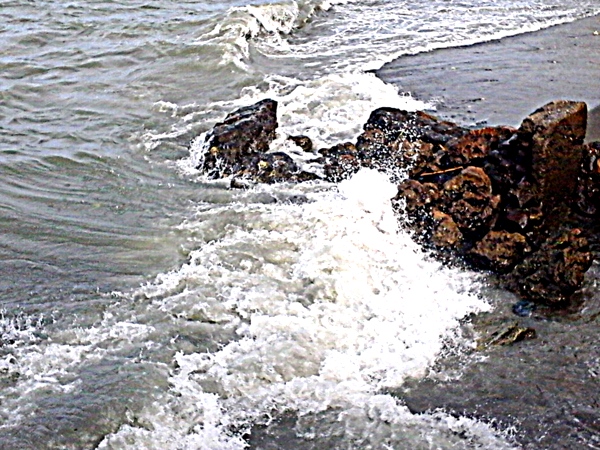 Riding the pump boat to Iloilo City gets dicey

But the waves were bashing against the shore fairly strong the other day as my wife and I were on our way to do some shopping. I was going to meet my American expat friend Rease W, see next photo, to quaff a beer or two. 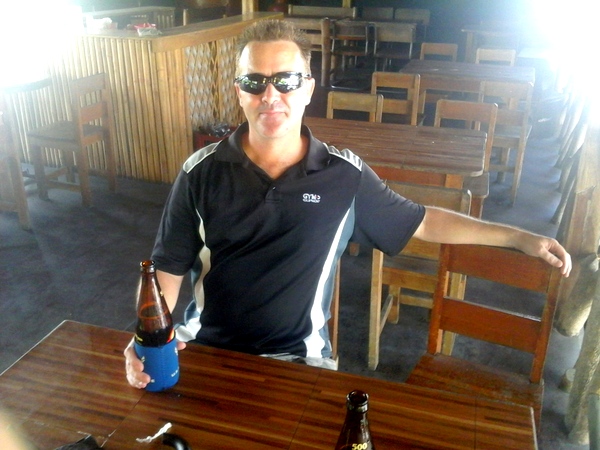 Rease was taking a well-deserved break as he and his wife, Liza, had been working as volunteers for several months in the devastated areas of Panay Island in Western Visayas slammed by Typhoon Yolanda last November. Hats off to this retired Air Force American and his spouse for making such personal sacrifices for those who have been suffering so much.

I’m sure Rease and Liza have had much more dangerous trips on their volunteer missions, but for this kano, who got splashed several times on my latest pump boat ride from Guimaras, it was bad enough for me. But thankfully, we don’t have the much smaller boats that ply the waters from Buena Vista to Parola Dock in Iloilo.  Check out the picture below. It’s like walking the plank to get on one of those Buena Vista boats; you can bet I had a tight grip on the ropes as I slowly made my way across .

A few years ago one of the vessels going from Buena Vista to Iloilo did capsize but fortunately no one was injured. Now that we live back on Guimaras province, we don’t have any occasion to board the smaller Buena Vista boats. 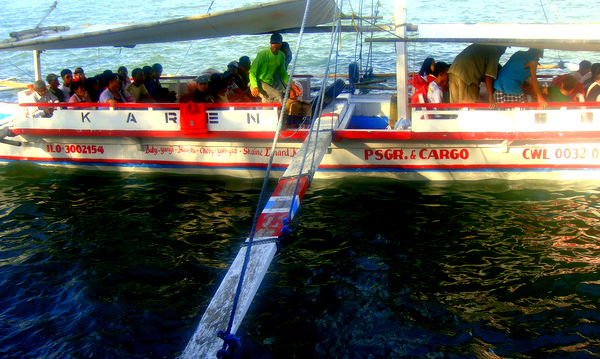 In the next shot we’re approaching Ortiz Wharf,  where at least this 62-year-old geezer can stumble up the stairs off the boat instead of walking the plank. Sometimes those steps are in bad shape, Parola Wharf is even worse, but Iloilo City is building a new ferry and passenger boat terminal. No motorcycles on the pump boat that day, only one bike, which is very unusual.

There’s often at least one motorbike sitting up front which blocks the path of the passengers getting off on the side the bike is on. Invariably, I pick the wrong side of the boat to sit on and sometimes get delayed a minute or two. But then again, I always picked the wrong check-out lane at Walmart back in the States or would pull up to an “Express Lane” that had a ten item limit and some moron would be emptying a whole basket full of crap.  But I’m a retired old geezer in the Philippines now;  I have all the time in the world. 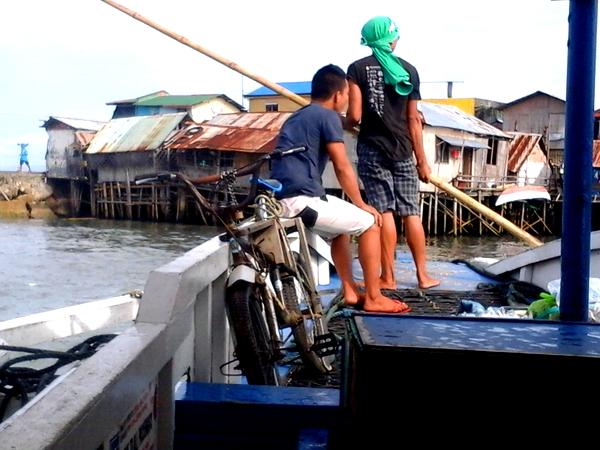 And that’s one of the good things about living in the Philippines as an American expat; having plenty of time to do plenty of nothing. And that’s something I’m an expert at!