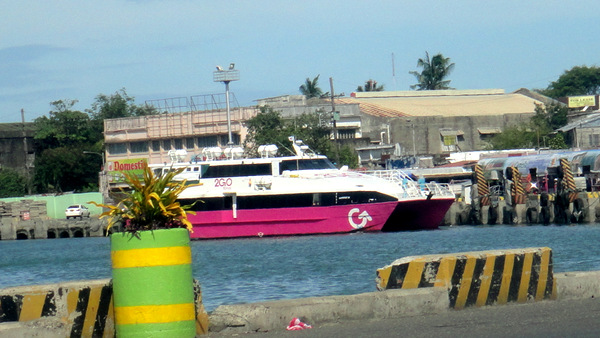 My asawa is observing a birthday soon. To celebrate, we planned to visit the “City of Smiles,”Bacolod, but our shopping spree in Bacolod City gets off to a shaky start as I feared we would not even make it on time to the Super Cat Ferry in Iloilo that would whisk us to our destination. My spouse and I have been married for almost 15 years and despite nine years of that marriage spent in the United States, my Fililpina wife still embraces “Filipino Time” on more occasions than I care to recall.

The first Super Cat from Iloilo City to Bacolod City leaves at 7:30 am. A couple of times the night before we left on our shopping expedition, I stressed to my spouse that we needed to leave at 5:45 am from our home at “The Farm” in Guimaras if we wanted to make the first trip. The second ferry to Bacolod would not leave until 10:30 am, three hours later.

We didn’t leave until 6:05 am the next morning, 20 minutes later than I had hoped we would depart. After catching a tricycle ride with Mario at our subdivision’s trike stand, we made it to the jeepney stop that would take us to Jordan Wharf where we would catch a banca boat to Ortiz Dock in Iloilo City. We then needed to travel by trike to the 2Go ticket office to purchase our tickets.

I had wanted to buy our tickets in advance the day before since we were already in Iloilo buying our monthly supply of groceries at the SM Hypermarket but changed my mind, since I was confident we would make it to the ferry dock early enough to buy our tickets the next day. At this point, it looked like I should have gone with my earlier plan.

We arrived at Ortiz Dock at 7:05 which only gave us 25 minutes to reach the ticket office and board the ferry. While you might think that the Super Cat might also be observing “Filipino Time” the Super Cat we took in April to Bacolod began boarding at 7:35 am, only five minutes late.

We hopped on a trike and instructed our driver to take us to the 2Go Super Cat Ferry office. About five minutes later the driver pulled up to where the office had been located.

“It moved!” our driver announced, “where do you want me to go?”

“I want you to go to the ticket office!” I exclaimed, stress level rising and knowing that if we had left earlier, as I had planned, my blood pressure wouldn’t be spiking now.

So the driver pulled up to the 2Go office, at least where the outlet used to be located, and a gentleman on the now empty lot pointed off in the distance indicating the Super Cat’s new location. We took off, time running out.

We finally arrived at the new passenger terminal building at 7:20 am and saw a long line at the 2Go ticket office. We manged to buy our tickets at around 7:35 and rushed inside where security quickly checked our bag. We started to go outside but noticed a large contingent of people seated inside. The ferry was late. It was delayed from Bacolod City and wouldn’t arrive until 8:00 am.

I plunked my butt down and noticed the banner I’ve posted below. 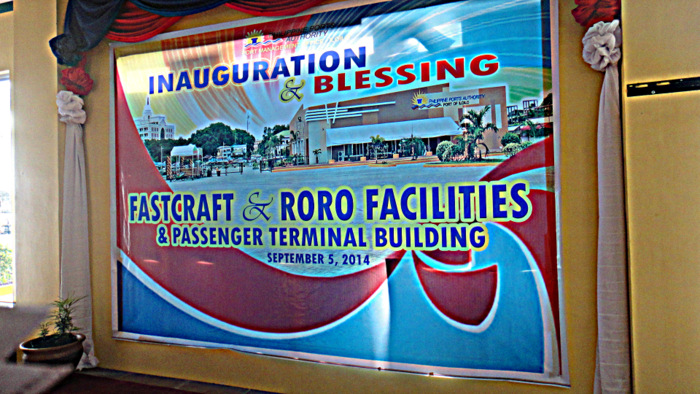 In the back of my pea-sized brain I recalled reading something about a new ferry terminal from Iloilo City to Guimaras. The new facility had opened the day after the inauguration blessing, this very day that we had chosen to go to Bacolod. That explained why our tricycle driver was confused along with his passengers. 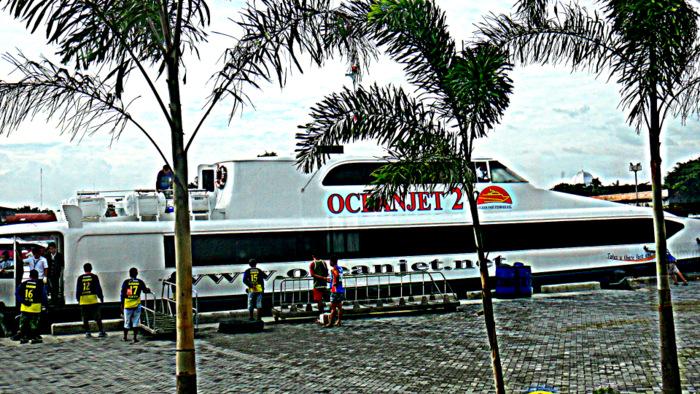 A new outfit, Ocean Jet, was already boarding passengers at 7:30 am, but when I checked their prices online later, they were charging a flat 500 pesos for all passenger classes. I decided to take a chance on the Economy Class on the way to Bacolod City for 280 pesos each but regretted that decision later as it was quite warm and humid on our hour long trip. For 350 pesos we could have gone in the air con Tourist Class and if we had purchased a round trip ticket, for P610, we could have ridden in air con comfort for only P310 each. 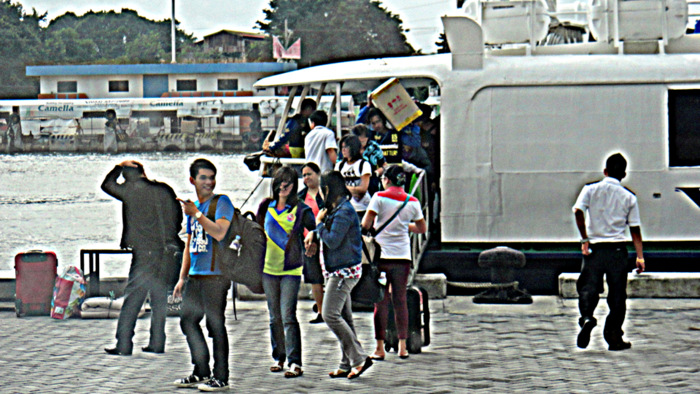 It was quite a windy day, as evidenced by the passengers from Bacolod leaving the Ocean Jet ferry. My wife informed me that it would not be wise to travel in February or March because the winds during that time of year would make ferry travel even more difficult. She can swim and I can’t so I think I will follow her advice especially with the dismal accident record of ferry accidents in the Philippines which have cost thousands of peoples their lives. 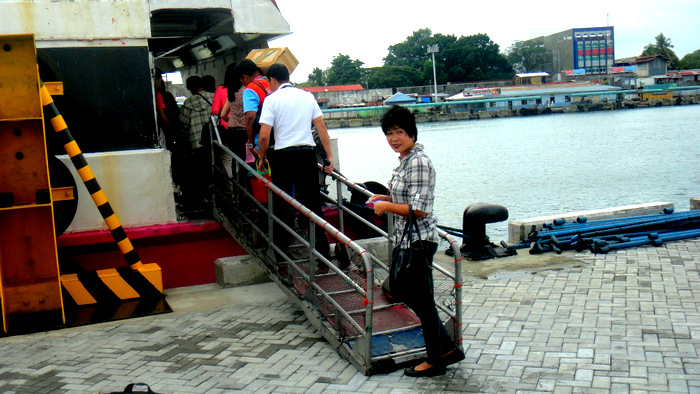 But we finally boarded the Super Cat around 8:00 and my asawa wanted me to take her picture as she stepped onto the ramp, signifying the beginning of our shopping expedition to Bacolod City. That’s her again in the next photo relaxing in the blue plastic chairs the economy class offered. She was comfortable and if we had gotten window seats, I might have been able to pick up a breeze as it was quite windy that day. 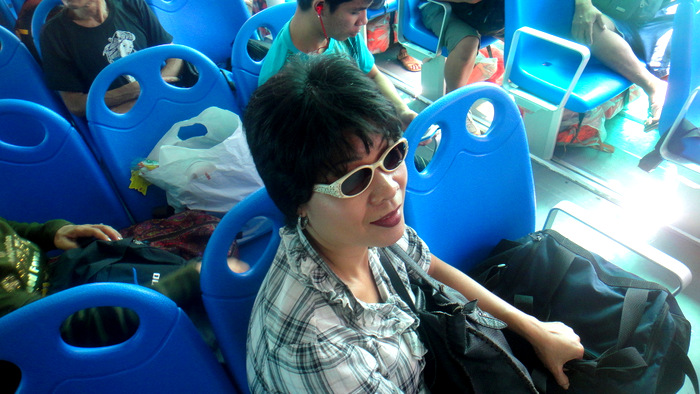 Some passengers were enjoying a movie but with the glare bouncing off the set, I couldn’t watch it even if I wanted. It was a movie from the Lord of the Rings trilogy but which episode, I couldn’t figure out and really didn’t care. I amused myself by looking out the window and looking for any good photo opportunities. But cloudy skies and occasional rain didn’t provide me with a decent light for a good shot, so I waited for our arrival in Bacolod City where we would take a taxi downtown to visit the Check Inn Pension House which was recommended by one of my faithful readers, Pantera. 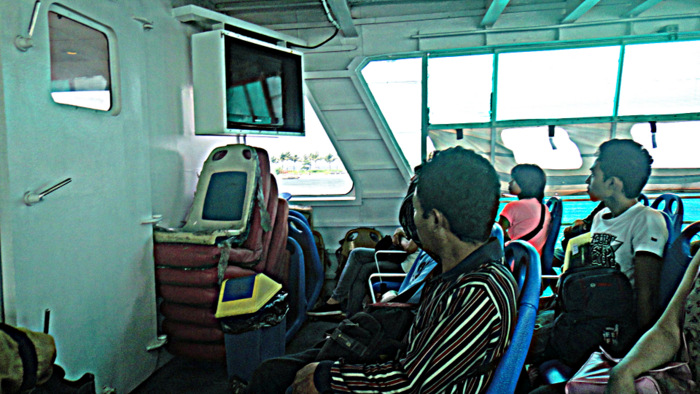 Our Bacolod City shopping spree gets off to a shaky start but we were finally on our way. It would be a three day visit to the “City of Smiles”where we encountered older workers employed at major retail outlets, a novelty in the Philippines where age discrimination runs rampant; shopping meccas like Bacolod SM City, a duo of teen thugs that were casing “The Kano” and a scammer that approached my wife looking for,what else, money to help out a sick relative in the hospital. More on our adventures in Bacolod City coming up.