After an initial setback, in which I believed a new survey could spark a turf war with one of our new neighbors, the survey on our Guimaras property finally yields a sketch plan. But it wasn’t easy as the crew from Iloilo had to work under rainy conditions for most of the day and convince the owners of the lot to the east of us, that the initial survey which revealed we owned 7,020 square meters, was, indeed, correct. 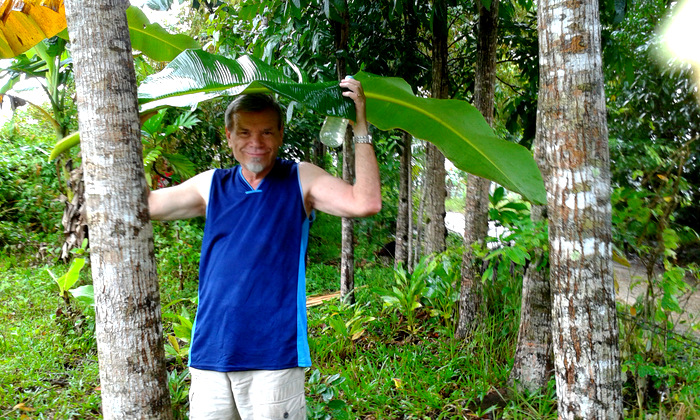 We didn’t have enough umbrellas to go around, so my resourceful asawa cut down a banana leaf to provide me with some cover from the nasty weather. I’m wearing a fashionable tank top that my spouse bought for me at the SM Hypermarket in Iloilo for 129 pesos, 2.89 US Dollars. 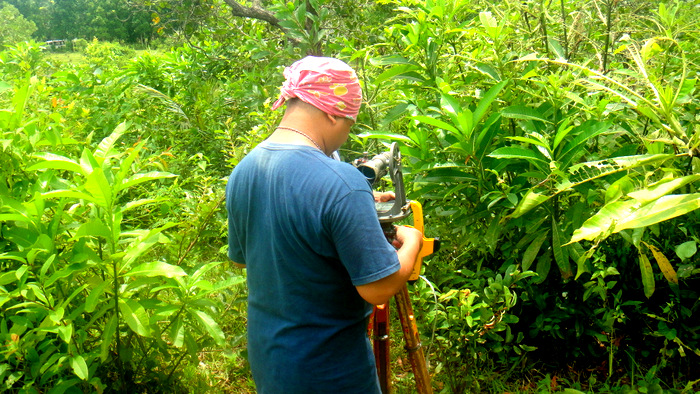 This is the lead surveyor who would call out to a co-worker in the distance holding a stake. When the lead man had made his necessary sightings and adjustments he would call out to the guy in the field with a “whoop whoop.” The man holding the stake would respond with a similar call. 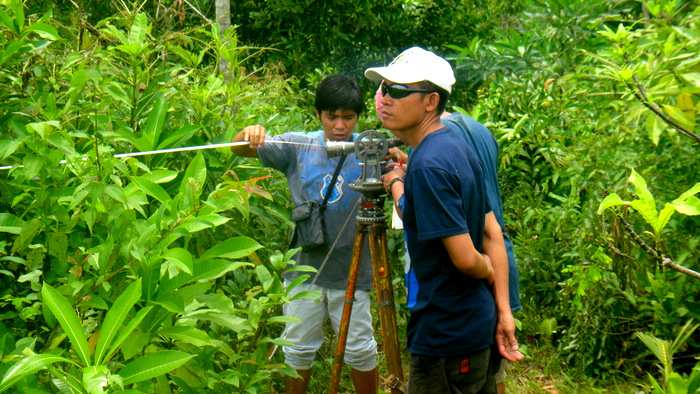 Brother-in-law Joery, with the shades and white cap, was on hand to make sure everything was in order. He, along with our caretaker, Gerry, were on there to set up concrete markers once the survey crew did the final layout. 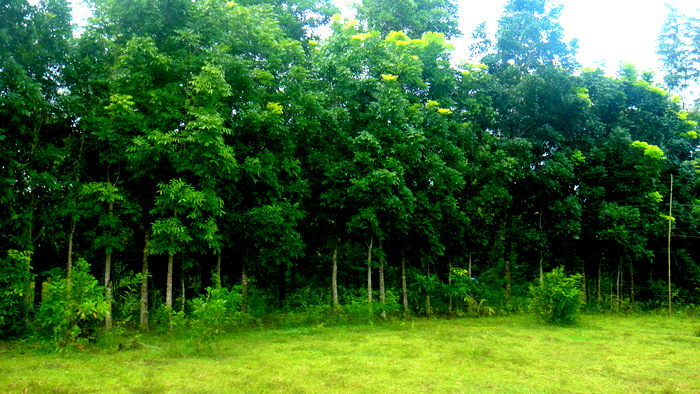 Here’s another view of the property as the crew continued to work despite the steady rain. This was the second time the group from Iloilo had come to Guimaras and we were anxious to have the survey completed today. The crew’s leader finally announced around 11 that he was ready to do the “final computing”and would have the final land sketch completed in about two hours or so. After that, the surveyors would do the final layout and Joery and Gerry would set up some more permanent markers and land boundaries.

Thankfully, no turf war between the seller’s niece, who owned the property east of us, had materialized as the previous disagreement with the seller, the uncle of the niece, had been settled. The issue with 500 square meters had been resolved. 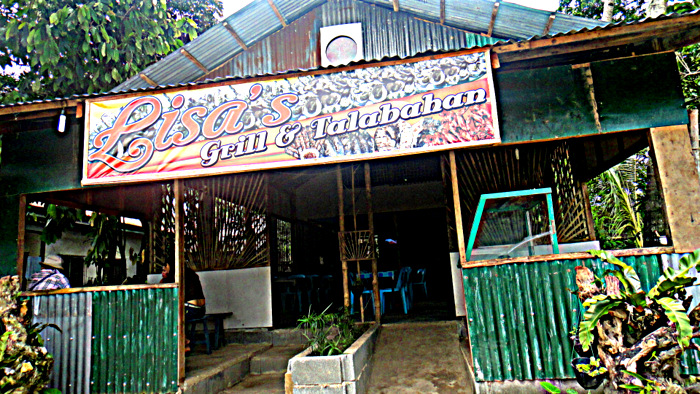 Our trike driver took us to a new location of Lisa’s Grill & Talabahan for lunch. The surveyors wanted to stay behind and work on the sketch but we would bring them back some lunch from Lisa’s. After my usual fare of four grilled pork sticks and rice, minus the San Miguel Pale Pilsen due to my fatty liver, we headed back in pouring rain to deliver the lunch. 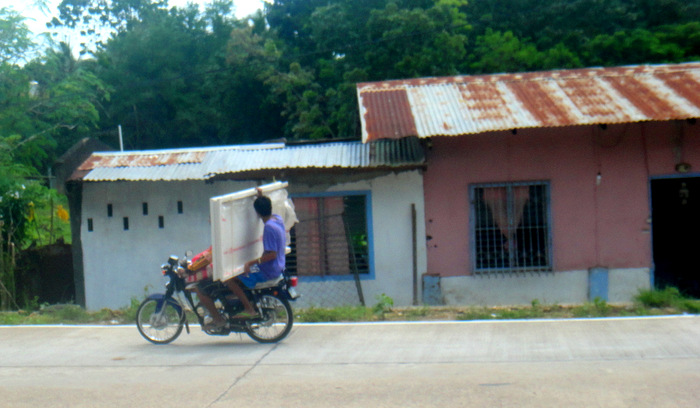 While waiting for my asawa to pay the lunch bill, which amounted to 831 pesos for seven people, less than 19 bucks, I took a picture of the motorcycle rider above. His passenger was carrying a table as they sped along the road. Welcome to the Philippines. 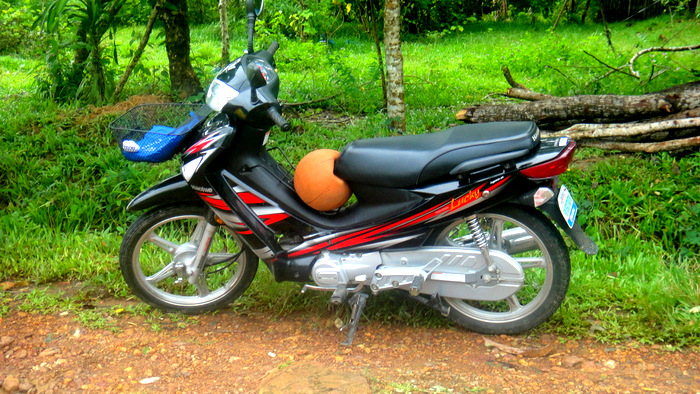 I spotted this motorcycle parked down the road of our new property and took this photo. Note the deflated basketball which serves as an extra seat. A family of six people rode by later on but I didn’t have my camera ready to take that picture. 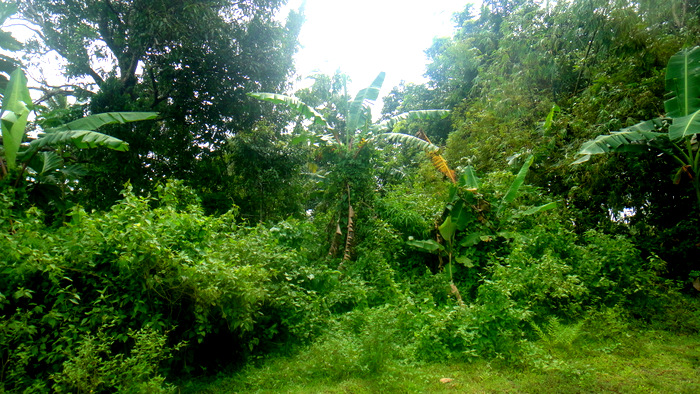 The final layout was done around 5 pm. Boundary markers were set in place and a barbed wire fence will encompass the entire property. My asawa and I found a stretch of land fairly near our private road and not far from our rice field, which looked like a good place to build our new house. However, our seller’s brother, on hand to help out the survey crew establish property lines, showed us a spot at a higher elevation where we had a great view of a nearby mountain. My wife and I both agreed that would be the site for our new place, though it meant laying out about 300 extra meters of power line, which we felt was a small price to pay for this view.

Plus, it would keep us away from the main road and provide a more secure and private location, as the site is completely surrounded by trees. With the survey now done and a construction site decided on, we can finish up our plans which we will submit to our architect. We’ll start building in November, which will bring cooler weather and an end to to the rainy season. A good time to build a new house in the Philippines.