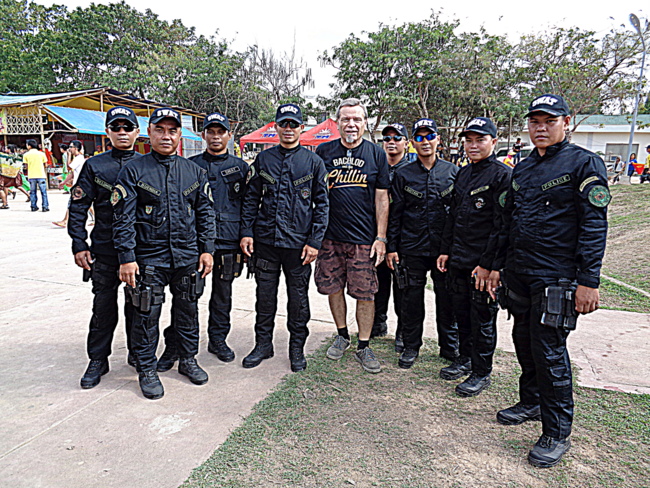 Decades ago I was in the United States Air Force military police. Maybe that’s why I always make it a point to be sociable to peace officers no matter where I’m at but especially in the Philippines. I’ve met quite a few friendly police men and security guards in nearby Iloilo on Panay Island and on our own island province. So I guess it shouldn’t come as a complete shock to my readers when I post a title such as the one above: “I Join the Guimaras SWAT Team at Manggahan.”

I had just finished taking pictures at the Street Dance Competition and was headed to the Food Court. It was only 9 am on a Monday morning but I had already finished a bottle of water and needed a cold drink on this sizzling hot summer day in the Philippines.

I noticed a group of men in black that were hopping off a police vehicle. I’ve never seen this contigent of police officers on our island and was amazed to see that they were a SWAT Team.

I walked up to the group and expressed my surprise that Guimaras even had a SWAT Team and asked if I could take their photograph. The men directed me to their leader who willingly granted my request. 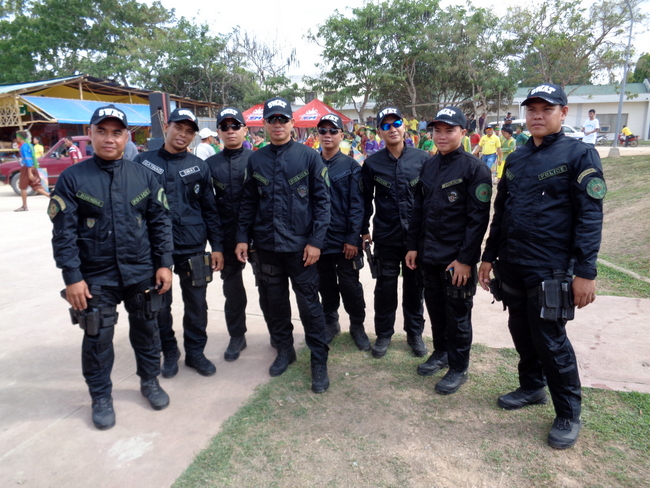 After the photo op, I sauntered over find a place to park my fat kano butt and have some liquid refreshment. I wasn’t planning on having an adult beverage so early in the morning but I was warmly greeted by the staff at Lisa’s Talabahan and was asked if I wanted a cold beer.

Well, why not? It was Manggahan, after all, my favorite time of year in Mango Land and a cold bottle of San Miguel Pale Pilsen would go down pretty smooth right now. 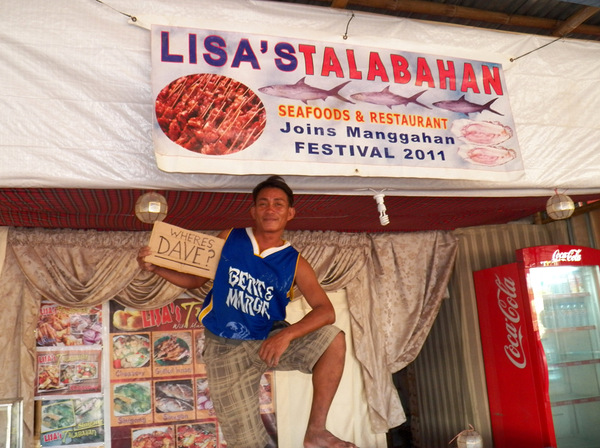 Photo Courtesy of The Tom Cat, from Manggahan 2011

As I pulled up a faded turquoise blue plastic chair at one of the long feeding troughs, I noticed a crew from the local BJMP, the Bureau of Jail Management and Penology. One lone female officer sat among the group of six or seven men and I remarked to her that she was lucky to be sitting around such a group of “gwapo” (handsome) men.

The men laughed and invited me to sit with them. I asked one of the officers sitting closest to me if I could ask them a question. He said he would try to answer any question I might have so I inquired whether or not the former jeepney dispatcher at our Jordan Wharf was still in jail.

The dispatcher, “Sunny,” reputed to be a habitual shabu user, had been in the BJMP,  Bureau of Jail Management and Penology prison,  outside of San Miguel, Jordan, Guimaras. Sunny had gotten pissed off at his cousin,  a fellow dispatcher at the Jordan Wharf, over a dispute concerning  a passenger, and which jeepney the passenger was going to ride. Sunny killed his relative.

The BJMP officer informed me that the dispatcher was now under house arrest as he had suffered a stroke and was in bad health.

I thanked the guard for the information and told him that if he returned to Manggahan and was off-duty I would buy him a Red Horse. He smiled and shook my hand. I then noticed a pretty pinay working next door working at a local joint where my asawa and I had sang karaoke on previous occasions.

I asked if I could take her picture and she gladly agreed. 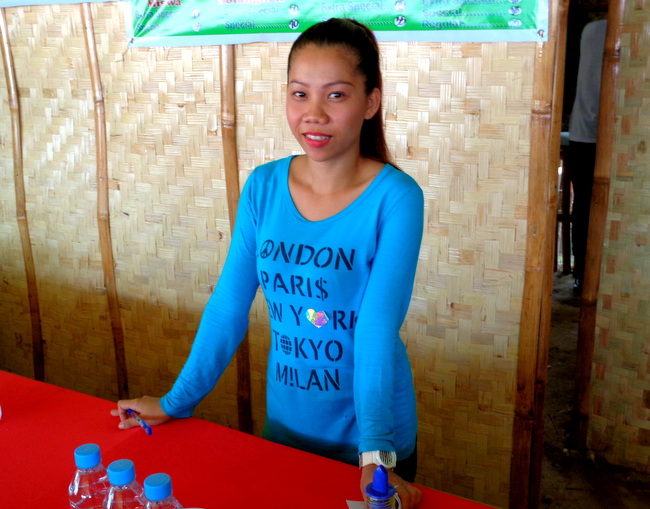 The cute Filipina in the next picture was preparing a batch of french fries for me when I took this photograph. The young lady has a great smile, don’t you think, like many Filipinas. And the fries? Delicious and fried to toasty perfection.

I got the largest size at a cost of 65 pesos, 1.50 US Dollars. I asked the lady on the right, whose face is obscured in the picture, if she had “salt.” No salt, but she did have ketchup. 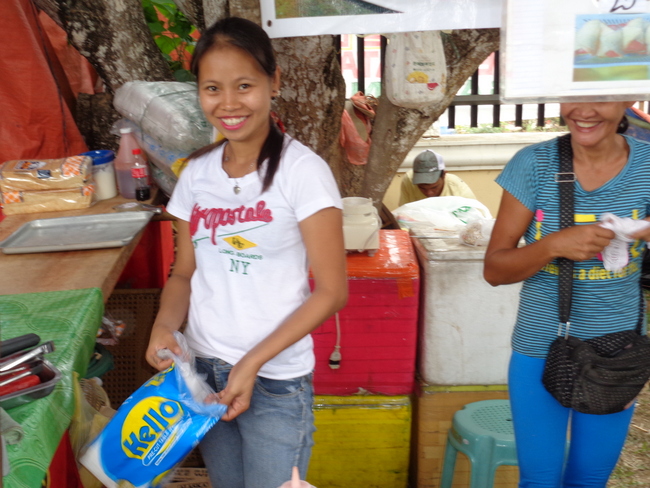 When the pretty pinay handed me my fries, the lady on the right held up a shaker of iodized salt and asked if I wanted “iodized.”

“Yes, yes, that’s what I wanted, “ I replied, “salt.” For future reference, I will now always ask for “iodized” and not make the mistake of asking for “salt.” (We went to Manggahan last Friday and I purchased some corn on the cob. The vendor asked if I wanted some “iodized.”)

It’s like asking for a “napkin” when I first arrived in the Philippines and chowed down at a local McDonald’s.  I received a puzzled look from the counter clerk when asking for said napkin. Make sure you request a “tissue” instead. A napkin refers to a woman’s feminine hygiene product. Lesson learned.

4 thoughts on “I Join the Guimaras SWAT Team at Manggahan”