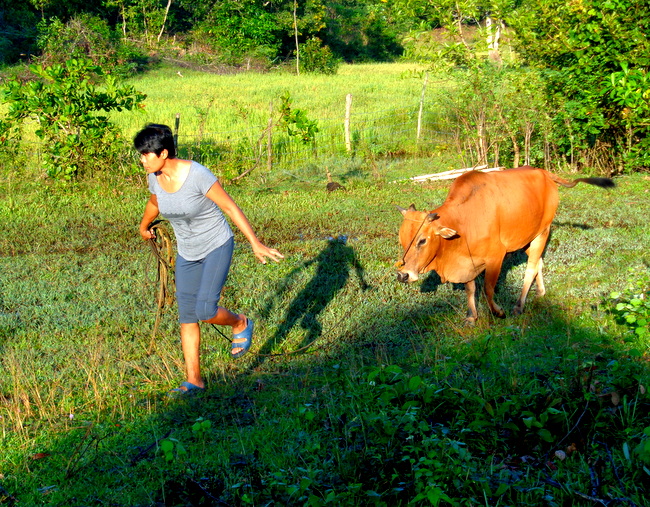 It might not be a pleasant topic for some: “Hulk is Dead” but unless you’re Shirley MacLaine who believes her dog was once an Egyptian god, there is no denying the fact that “The Hulk” will not be roaming our premises in the Philippines any longer.

Ms.MacLaine took the prime minister of Sweden Olof Palme as a lover in the 1970s. She came to the realization that she last had sex with Olof 1,200 years earlier when he had been Charlemagne the Great, ruler of the Holy Roman Empire and she had been a Moorish peasant girl.

Unfortunately for Hulk, it doesn’t appear that he has any peasant Moorish girl in his future (or past for that matter.) Hulk, the cow my brother-in-law Joery has been taking care of for over the past five years, has been sold.

Joery’s youngest, JalAmiel, 8, is quite saddened by this news as Hulk will soon end up on someone’s dinner plate as a steak or hamburger.

But that’s the way things are:

Unless, you’re Shirley MacLaine, of course.

My mother-in-law purchased the cow for 7,000 pesos, 148 US Dollars. Joery has been caring for him the past five years. He sold for 24,000 pesos, 500 USD. No feed was ever purchased for him. He was grazing at my asawa’s property at “The Compound” and has been at our new location in the Philippines for the past several months.

In fact, I had just taken what will be the last video of the fallen Hulk a few days ago.

I didn’t name the animal. I’ve heard it’s best not to name any creature you plan to slaughter. I personally had no attachment to the beast. I never gave it water. I never moved it to greener pastures. My brother-in-law and wife took care of that. I, did, however, have to honk my horn at the cow a couple of times, when he blocked the path to our gate. But that’s about it.

Now my spouse has no source nearby to collect her cow poop. But like Shirley MacLaine, Hulk will live on as his previous poop has been used to fertilize the cornucopia of plants and flowers planted in our yard.

Rest in peace, O,  Noble Hulk. I like my steaks well done (Hulk is Dead).

4 thoughts on “The Hulk is Dead”