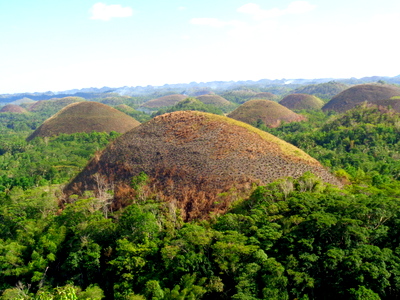 During a recent day tour in Bohol, my asawa and I visited the Chocolate Hills, a geological formation in the Bohol province of the Philippines. There are at least 1,260 hills but there may be as many as 1,776 hills spread over an area of more than 50 square kilometers (20 sq mi). They are covered in green grass that turns brown (like chocolate) during the dry season, therefore the name. 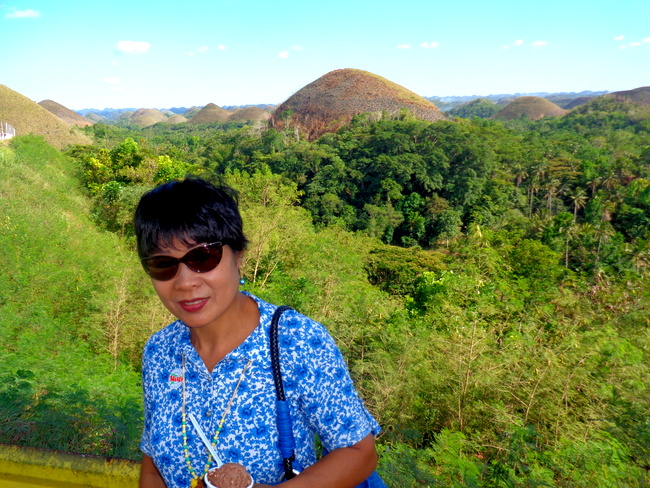 The Chocolate Hills are a famous tourist attraction of Bohol. They are in the Philippine Tourism Authority’s list of tourist destinations in the Philippines and have been declared the country’s third National Geological Monument and proposed for inclusion in the UNESCO World Heritage List.

You have to climb 244 stairs to reach the best vantage point to view The Chocolate Hills. It was an extremely hot afternoon, around 90 degrees Fahrenheit,  but my asawa and I still “raced” up the steps to see who could reach the top first. We both quickly lost steam but even at 64 years of age, this crusty old expat was still passing up loads of tourists that were jamming the stairway.

Who reached the top first? Well, since I’m the one writing this blog, I do believe I ended up reaching the summit before my spouse. Now our tour guide had limited our visit to only 20-25 minutes, and frankly, we were rushed. It would have great if we could have spent more time at the site but we did manage to consume a couple of over-priced scoops of ice cream at the souvenir shop and eatery on site, thus negating any calories lost on our climb. 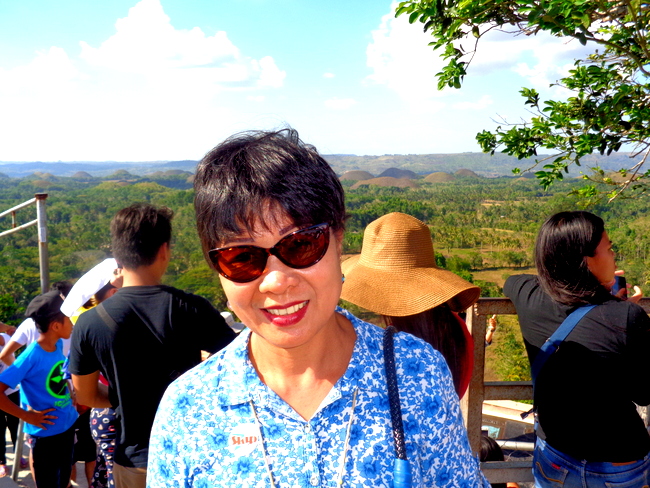 View from the top, my asawa and I both made it up the steps without passing out

The Chocolate Hills form a rolling terrain of haycock hills – mounds of a generally conical and almost symmetrical shape. Estimated to be from 1,268 to about 1,776 individual mounds, these cone-shaped or dome-shaped hills are actually made of grass-covered limestone.

The domes vary in sizes from 30 to 50 meters (98 to 164 ft) high with the largest being 120 meters (390 ft) in height. These unique mound-shaped hills are scattered by the hundreds throughout the towns of Carmen, Batuan and Sagbayan in Bohol. 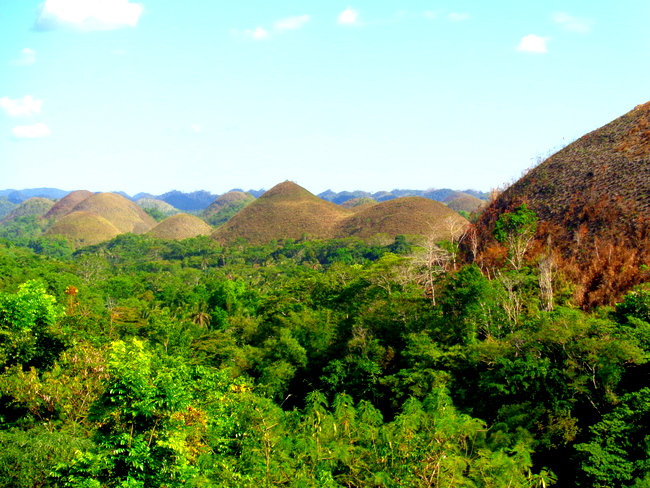 During the dry season, the grass-covered hills dry up and turn chocolate brown. This transforms the area into seemingly endless rows of “chocolate kisses”. The branded confection is the inspiration behind the name, Chocolate Hills.

Our tour guide, on the way back to the Tagbilaran Wharf to catch our SuperCat Ferry back to Cebu, related to us the three legends that explain the formation of the Chocolate Hills. The first tells the story of two feuding giants who hurled rocks, boulders, and sand at each other. The fighting lasted for days, and exhausted the two giants. In their exhaustion, they forgot about their feud and became friends, but when they left they forgot to clean up the mess they had made during their battle, hence the Chocolate Hills.

A more romantic legend tells of a giant named Arogo who was extremely powerful and youthful. Arogo fell in love with Aloya, who was a simple mortal. Aloya’s death caused Arogo much pain and misery, and in his sorrow he could not stop crying. When his tears dried, the Chocolate Hills were formed. I advised our guide that this was my favorite explanation for the Chocolate Hills.

The third legend tells of a town being plagued by a giant carabao, who ate all of their crops. Finally having had enough, the townsfolk took all of their spoiled food and placed it in such a way that the carabao would not miss it. Sure enough, the carabao ate it, but his stomach couldn’t handle the spoiled food, so he pooped, leaving behind him a mound of carabao crap, until he had emptied his stomach of the food. The poop then dried, forming the Chocolate Hills. 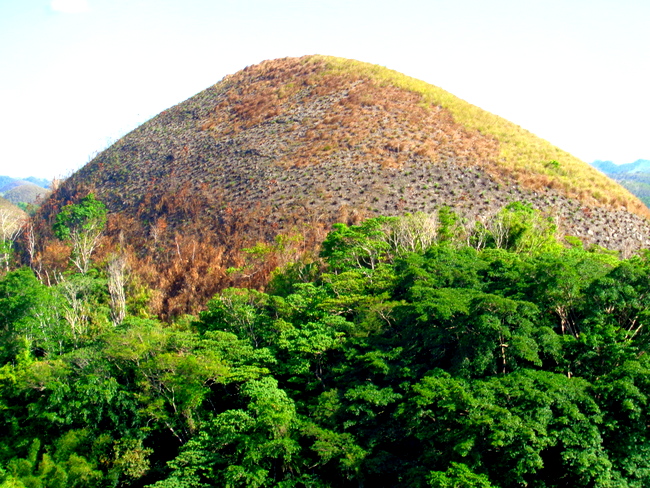 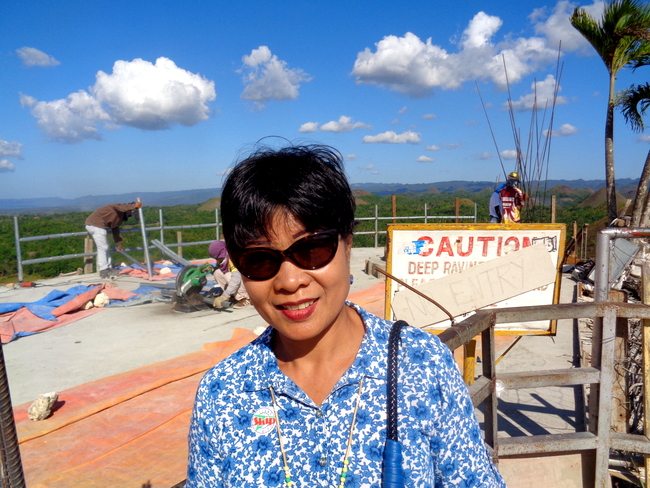 My spouse posed by a construction site near the top of the Chocolate Hills viewing point. Visiting this tourist attraction in beautiful Bohol was certainly the highlight of our day trip. If you’re living in the Philippines, this is one place you do not want to miss. It was the first visit for both my asawa and I and we thoroughly enjoyed this stop on our day tour in beautiful Bohol. 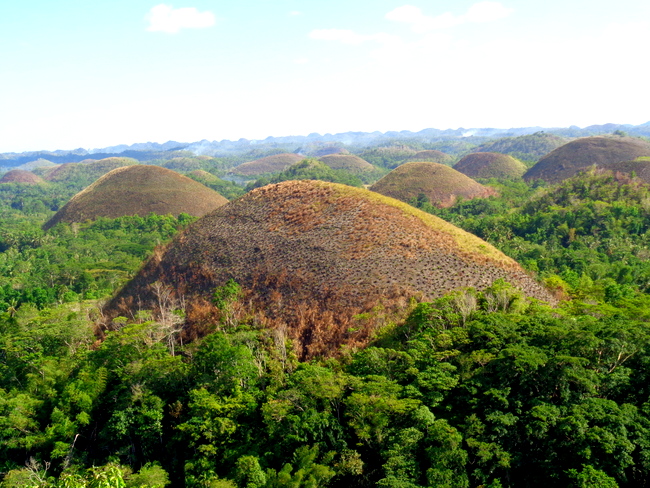 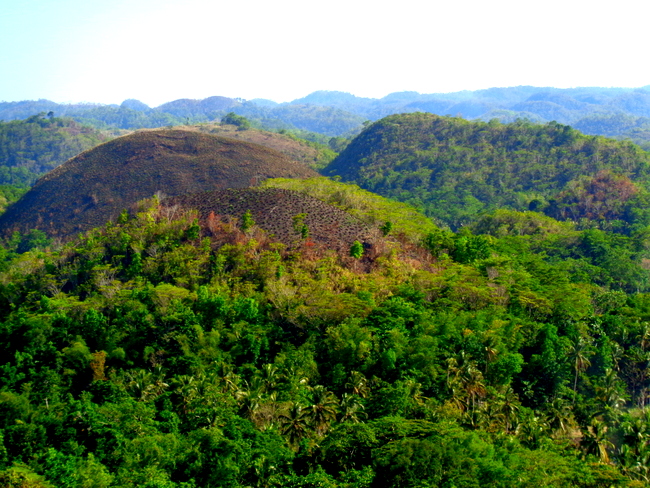 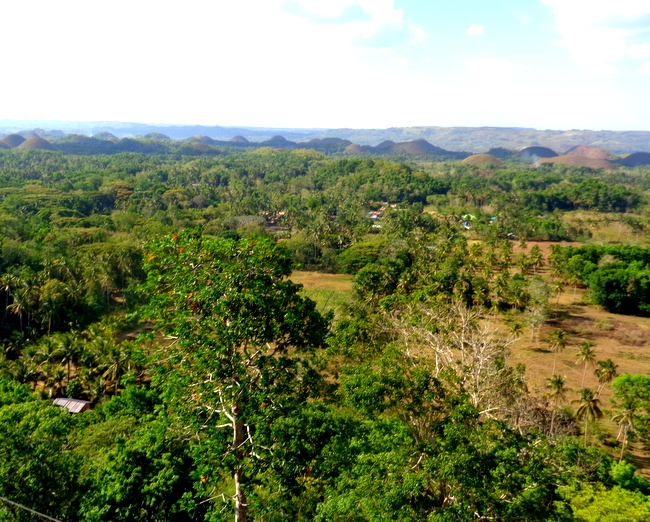 (Source of background material: Wikipedia  All photos taken by “The Kano” and may be used provided you submit a back link to Philippines Plus)

4 thoughts on “The Chocolate Hills in Beautiful Bohol”