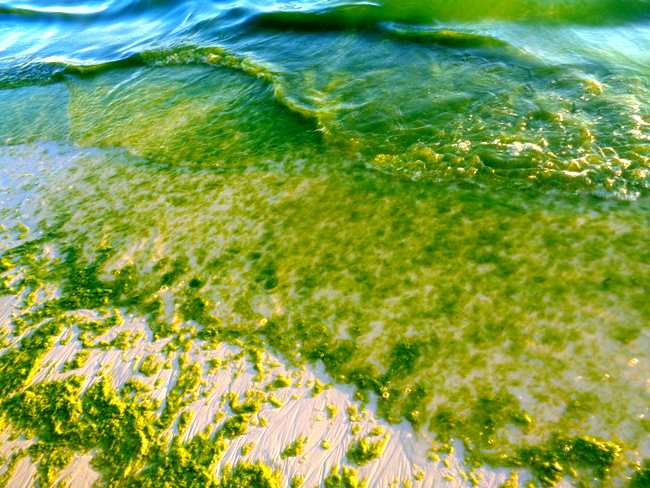 Boracay’s ‘Black Eye’: Slimy Green Algae Covers Beaches” relates the impact algae had on our four-day vacation in “paradise”. My asawa and I, along with two nieces and a nephew, recently visited Boracay, touted as one of the best beaches in the world.

We first traveled to this white sand nirvana back in June 2016 and enjoyed the pristine white sandy beaches and the sparkling turquoise blue waters with nary a trace of algae. However, before this year’s excursion, I had read online reports of algae choking Boracay beaches prompting some visitors to leave disappointed.

As soon as we hit the beach, my spouse noticed the pea-soup green color of the water immediately. I looked down past my rotund belly and was amazed at the abundance of the slimy green algae that blanketed the beaches. 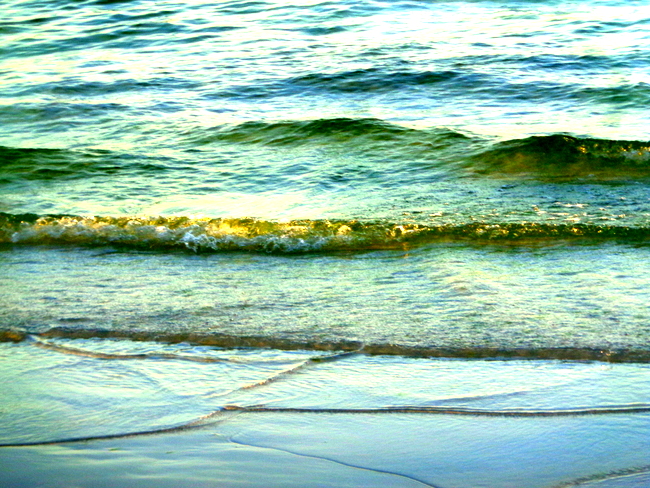 The water along the beach was discolored with copious amounts of sickening, slimy green algae. 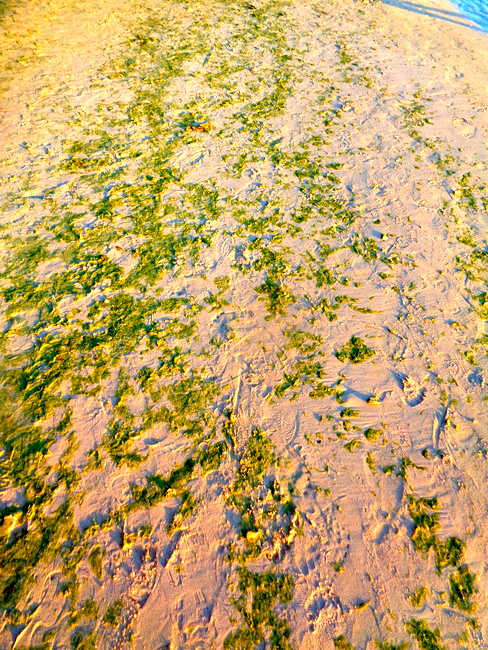 The algae also lined the entire white beach section of Boracay as seen in the picture above and the photos below. 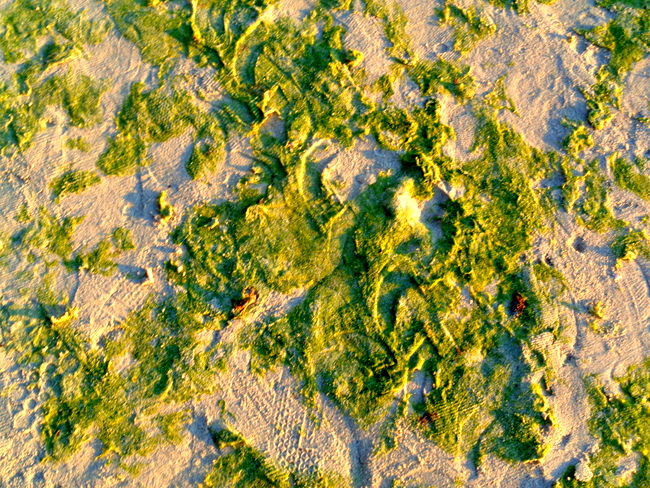 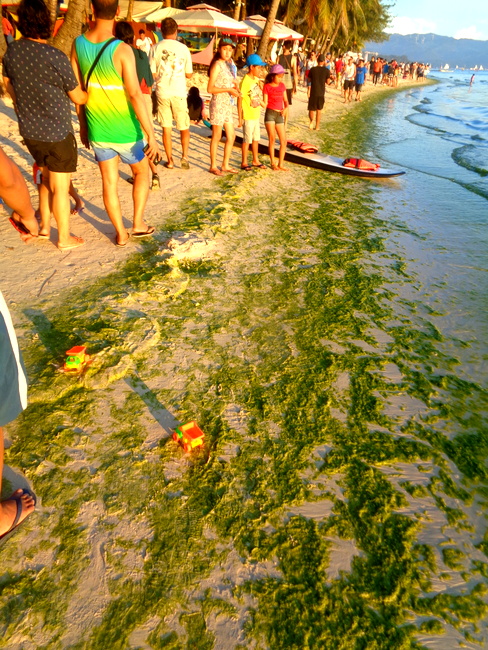 The slimy green algae in Boracay stretched all along Stations 2 and 3. We stayed at a hotel about a minute’s walk from Station 2. We had to take an island hopping tour to Puka Beach to escape the algae. My wife and the kids were able to swim in the pristine waters of Puka Beach but no one in our group ventured into the slimy green waters of the so-called “White Beach.”

I was informed by one of Boracay’s official tour guides that tourism was off this year. A couple of vendors I spoke to also backed up the tour guide’s claim. Here’s the three reasons our guide gave us for the decline in Boracay tourism:

During this year’s visit, the peak tourism season, we noticed that the crowds seemed to be about the same as we noticed last June, the off peak season. Areas like the D’Mall retail center also seemed less crowded.

If not for a dragon boat competition held the last two days of our stay, we would have witnessed even less tourists. 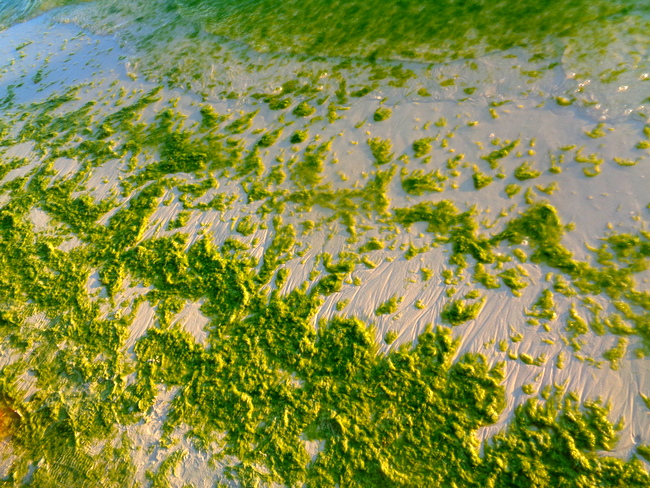 Locals: “Algae is Good for Boracay”

However, according to a report from ABS CBN NEWS, in the first two months of 2017, the Department of Tourism (DOT) recorded a total of 344,026 tourist arrivals. This was higher compared to the 331,957 in the same period last year. But note those figures are for the first two months of 2017, before the Bohol terrorist attacks and the algae reports.

Not to worry, however, local’s claim the slimy algae bloom is just natural and claim it is even one of the reasons why Boracay’s sand remains powdery white.

Locals even participated in an event in which they tossed globs of slimy algae at each other, claiming it was a game that the kids played before the advent of Facebook and video games. Well, you have to admire the residents’ ability to turn “lemons into lemonades.”

But could the locals’ judgment possibly be clouded? Frankly, their livelihood depends on a vibrant tourism industry. Slimy green algae along the beaches of Boracay are not exactly a selling point for most tourists.

Algae is a Disappointment for Many Tourists

While many tourists are excited to see the 4-kilometer stretch of white sand, some are utterly disappointed with the algae bloom occurring in some areas of the beach. Count my asawa among one of those disappointed.

Two visitors interviewed by ABS CBN NEWS were visiting Boracay for the first time. Both of them were extremely disappointed by the slimy green waters and the algae-ridden beaches.

One of the visitors, Angelica, said this was not the Boracay she pictured in her mind. “I do not know why they call it ‘the best beach.’ Was much better beaches in Bohol or Cebu. Cleaner yet,” she said.

This is not the first time that the waters near the White Beach turned green. In fact, algae bloom is said to be an ordinary occurrence during the summer season. The tourist guide I mentioned earlier told me that the algae are driven away by winds that occur in June.

In 2015, former Department of Environment and Natural Resources (DENR) Secretary Ramon Paje expressed his concern over the worsening quality of water in Boracay.

This was the same year when the agency’s Environmental Management Bureau in Western Visayas reported that the coliform levels in Bulabog Beach had already gone beyond safety standards. Coliforms are bacteria that are usually found in human and animal wastes or from decaying organisms.

DENR said that untreated wastewater is one of the biggest contributors of coliform in Boracay. This, despite the presence of Boracay Island Water Company which requires the wastewaters from commercial establishments to undergo treatment in their facility before releasing it into the sea.

In the five-year (2010-2015) study conducted by the Japan International Cooperation Agency, which comprised Filipino and Japanese scientists, it was found that one of the main culprits for algae bloom and coral reef deterioration is the direct discharge of untreated waste water.

Last year, the 1,032-hectare island recorded a total of 1,725,483 tourist arrivals. DOT expects the numbers will be higher this year, despite the bad publicity Boracay has been getting.

Really? Well, I guess the tourism department has to put a positive spin on everything, even green algae choking the waters and beaches of Boracay.

The ranking is based on reviews of travelers posted on TripAdvisor, which claims to house 435 million reviews and opinions covering 6.8 million accommodations, restaurants, and attractions around the world.

Does “The Kano” Recommend Visiting Boracay

So what’s my personal view on whether Boracay is worth visiting? Despite the current algae problem, high prices and irritating vendors that patrol the beach, I would recommend visiting Boracay if you live in the Philippines and never have visited it before.

If, however, you’re planning a trip to the Philippines and considering Boracay as one of your destinations, you might want to wait until June when the algae is supposed to be gone for the season. The algae didn’t spoil our Boracay vacation for me, but I can’t even swim.

However, I’ll list in a future post the reasons we don’t plan to visit Boracay again; algae is just one of them. Stay tuned.