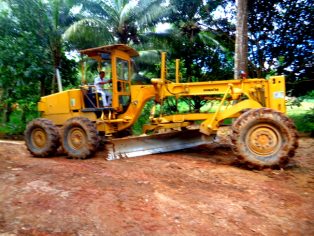 Our muddy road, replete with ruts deeper than Bill Gates’ pockets, has finally been restored to drive-able conditions. “Road Repaired! A Big Thanks to Guimaras Governor Gumarin.” And thanks to the crew from the Guimaras Provincial Engineering Office.

Readers of “Philippines Plus” may recall my early blogging endeavor, “The Rooster Crows at 4 am.” My asawa and I, along with 11 other relatives, lived in my wife’s first home which I jokingly called “The Compound.”

We didn’t have any security concerns, aside from drunken relatives that lived down the lane from us, but “The Compound” referred to all of the people that lived there. No one was forced to wear hippie beads, however, and no one had to rise at 2:00 am and chant mantras.

OK, my mother-in-law, “The Giant Lizard Killer” would recite her rosary around 4 am every morning, about the same time the roosters crowed. But, as anyone living in the Philippines knows, roosters are pretty much on a 24/7 schedule and can crow anytime. That applies to mother-in-laws, also.

I oftentimes referred to our “subdivision” pathway as a “muddy, cow-poop laden road.” Our current road in Guimaras, the one we traverse to reach our main highway, is not laden with cow poop, only mud. Lots of mud. But not any more.

With all of the much-needed precipitation we’ve received this rainy season, our roads have rapidly deteriorated over the past two months.


The Western equivalents of these are of course: “The check’s in the mail” and “I’ll respect you in the morning.”

A month later, during a second visit to our local barangay hall, I asked about some white rock for our road again. My second request did not receive a positive response either.

Visit to the Mayor’s Office

Finally, my wife and I visited our local Mayor’s Office on September 11th. After waiting to see the mayor for over an hour, we were told the mayor would not be in.

However, our local barangay captain was at the Mayor’s Office for a meeting and waved to me from the next room.

I went over to the kapitan and informed him that we were still trying to get some much-needed white rock and repairs for our road. The road conditions had become very dangerous and there were reports of motorcyclists falling down on the muddy path.

Our barangay captain then spoke to another official at the Mayor’s Office. The official then spoke to me and assured me that white rock would be delivered in three days.

Here is a picture of the rock that was delivered more than two weeks later. Our neighbors informed my wife that the rock, which we believe was delivered from our municipality, was dumped off by workers who instructed people nearby to spread the rock out themselves. 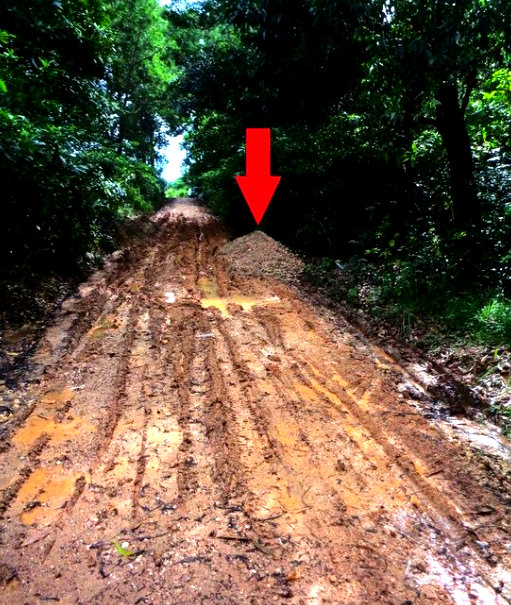 Pepsi Truck Tears Up the Road

Finally, our section of the motorway had become completely impassable after a Pepsi Cola delivery truck tore up the road even more with even deeper ruts. 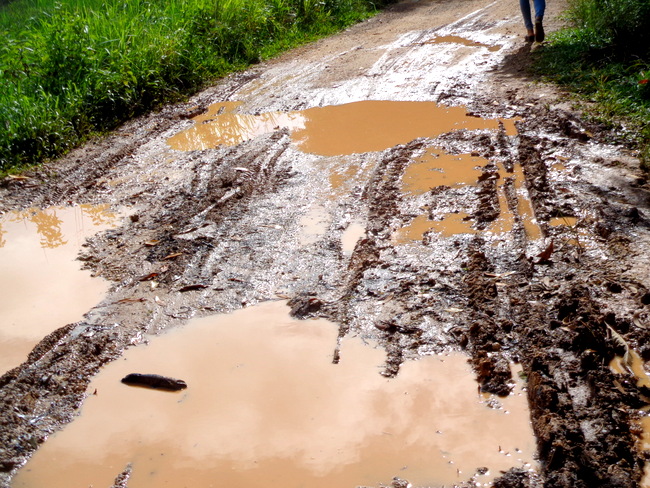 Our only way to the main market was now through the opposite end of the road. This detour added 20 minutes to a trip that used to take 10. Now a round trip to the market took an additional 40 minutes.

Our niece told us about the following sign posted at the entrance to our boulevard, no doubt a result of the Pepsi truck trek. My asawa and I walked through the muddy path to take the following picture. 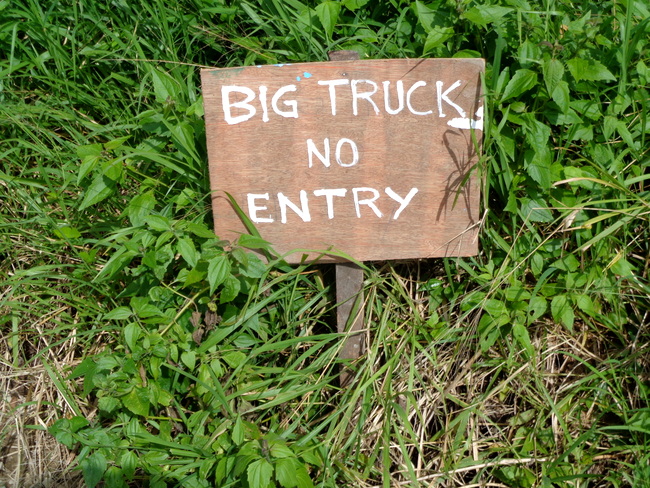 When I saw that sign, my blood pressure must have jumped 100 points! How did that sign solve our road problem? We made our way back home, shoes caked in mud, and hopped in our Ford Ranger. We were going to the Governor’s office, albeit the long way around.

Our Governor in Guimaras is the Honorable Samuel T. Gumarin, MD, Governor. The Governor’s Office is located at the Guimaras Provincial Capitol in Jordan. I had not even put my “big boy” jeans on and sported my usual “uniform,” a t-shirt, cargo shorts and a bandana to cover my fat bald head. I, did, however, change my muddy shoes.

My better half and I approached the main entrance of the Capitol Building. I walked up to a friendly gentlemen posted outside at the information desk. He gave us directions to the Governor’s Office and waved us in.

We hiked up one flight of stairs to the Governor’s Provincial Office on the 2nd floor and walked in. The place was busier than Donald Trump’s Twitter account. The office was chock-full of ordinary citizens like us sitting down in various locations throughout. Industrious government employees darted back and forth.

After making our way to one gentlemen sitting at his desk, my wife began speaking to him in the local Ilonggo lingo. I don’t speak the local language.

For you new readers out there, I’m too old and too lazy to learn the local language. Plus, there’s always someone around who speaks English.

After several minutes trying to explain our purpose to the gentleman in the Governor’s Office, we’re escorted by a man that takes us to the Provincial Engineer’s Office in another section of the building.

We’re taken to a lady who definitely looks like she’s in charge. We wave to a relative working in the office who was sitting nearby.

My wife explains the dire situation concerning our roads. The helpful lady instructs us to file a “Letter of Request” for white rock and bring it back to the Governor’s Office. She does inform my spouse that there are several requests for white rock ahead of us, however.

We return home and my fat fingers type out a letter of request addressed to the Governor, asking, no, pleading, for the Governor to help us. We dropped off the letter two days later on a Friday afternoon, September 29th.

Road Repaired! A Big Thanks to Guimaras Governor Gumarin

We experienced heavy rains the next few days but on Wednesday afternoon, October 4th, we heard the sound of trucks nearby our gate. I walked outside our gate and several meters away saw a gentleman standing next to his massive grader speaking with some neighbors.

The worker from the Provincial Engineering Office graciously allowed me to take the following pictures. He also informed me that it was due to our “letter of request” that the work was being done. 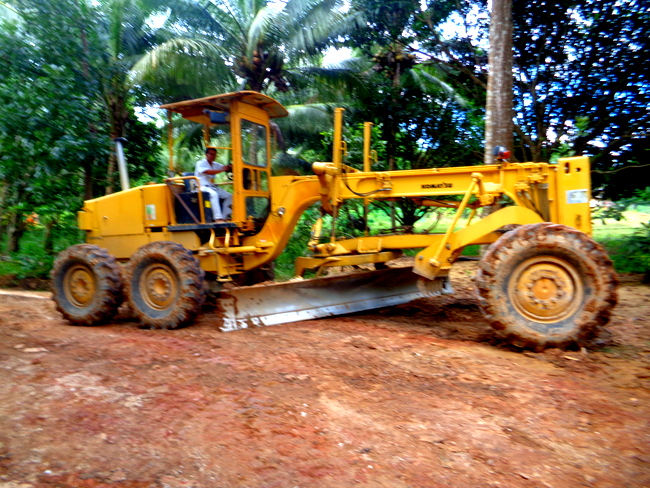 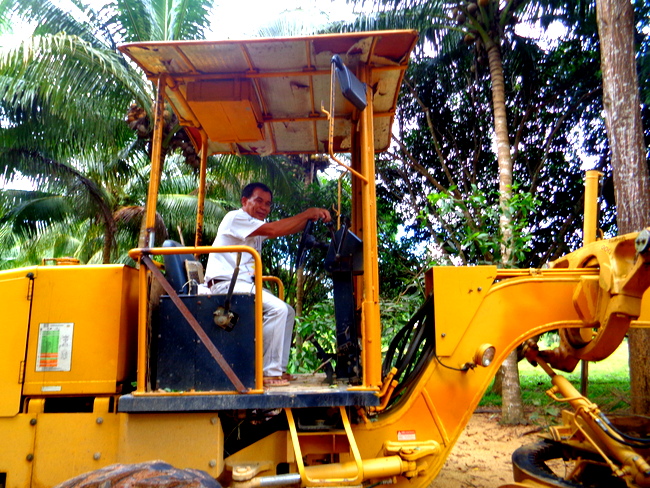 I expressed my sincere gratitude to the gentleman and asked him to please convey our thanks to Governor Gumarin and the Provincial Engineering Office.

Not only was the road grader on site but two more trucks with white rock and dirt showed up!

I was EXTREMELY impressed by the Governor’s and the Engineering Office’s quick response. The road now has white rock spread on the dangerous formerly muddy and slippery incline. The grader has smoothed out all the deep ruts and the road is now a joy to drive on again.

My asawa and I dropped off a letter of appreciation to the Governor’s Office. I’ve forwarded that letter to President Duterte’s Office to let him know what a superb job our Governor and his staff are doing.


Again, a Big Thanks to Guimaras Governor Gumarin and the Provincial Engineering Office for a job extremely well done.